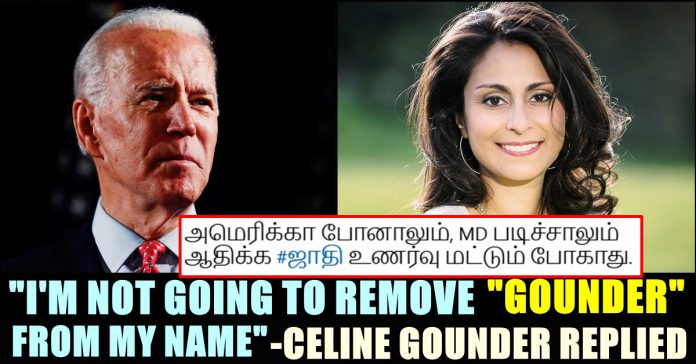 Celine Gounder, Assistant Professor in the New york University Grossman school of medicine, has been appointed as a member of the Coronavirus taskforce of US president-elect Joe Biden. She who has her origins in India, is a daughter of Mr. Nataraj Gounder from Tamil nadu. Chief minister Edappadi K Palaniswamy and leader of the opposition party MK Stalin, congratulated her for her immense achievement. Vivek Murthy, a former US surgeon General has made it to the task force as well. His family was originally from Karnataka. It is notable that he was asked to resign by the Trump administration in 2017 and he is making his comeback to the health policy.

I'm extremely happy that @celinegounder & @vivek_murthy have been appointed in the National Pandemic Taskforce of US to combat #COVID19. Both of them have made India proud and I'm very glad to learn that Dr.Celine Gounder has a Tamil heritage. My best wishes to both of them. pic.twitter.com/b6EkrmOKB8

Going by her Linkedin account, Celine Gounder is a practicing HIV/infectious diseases specialist and internist, epidemiologist, journalist and filmmaker. She completed her BA Molecular Biology from Princeton university and did her Master of science in Epidemiology from the Johns Hopkins Bloomberg school of Public health. In University of Washington, Celine did her MD.

Celine whose native is a village in Erode, was an intern and resident in Internal Medicine at Harvard’s Massachusetts general Hospital, and a post-doctoral fellow in Infectious diseases at john Hopkins university. In the year 2016, she was elected as a fellow of the Infectious diseases society of America.

Celine has been happily sharing the tweets are appreciation she is receiving through her official twitter account.

Indian TV went to the village to interview my family! https://t.co/FeobbAg6Oe

My people in Tamil Nadu, India are very proud: pic.twitter.com/xtFzCFNrdM

Meanwhile, a number of Twitter users criticized Celine for not removing her second name which represents a particular caste in Tamil nadu. “Please remove the caste name, It doesn’t suits your education” said one of a twitter user whereas another asked which university gave her the “Gounder” degree.

Congratulations. But pls remove gounder from your name. Tamils won't put caste in their name!!

Responding to such comments and criticisms, Celine said that her father immigrated to America in the year 1960 and Americans found it difficult to pronounce his name “Natarajan”. She said “Gounder” was easier for them and shared an article which said Vice president Kamala harris’ name was mispronounced.

“My father changed his name to Gounder in the early 1970s before I was born. My name is my name. It’s part of my history and identity, even if some of that history is painful. I didn’t change my name when I got married. I’m not changing it now.” she firmly said in another tweet.

My father changed his name to Gounder in the early 1970s before I was born. My name is my name. It's part of my history and identity, even if some of that history is painful. I didn't change my name when I got married. I'm not changing it now.

A gesture of Bigg Boss contestant Aari in the Wednesday episode impressed the users of Internet which is evident through the comments they are...

Pujara Faced The Highest Number Of Balls In This Series Compared To Both Teams !! This Leading Actor Can’t Resist From Praising Him !!

History beckons for Team India in Sydney and the visitors certainly batted like they are chasing it on a beautiful day at the SCG....