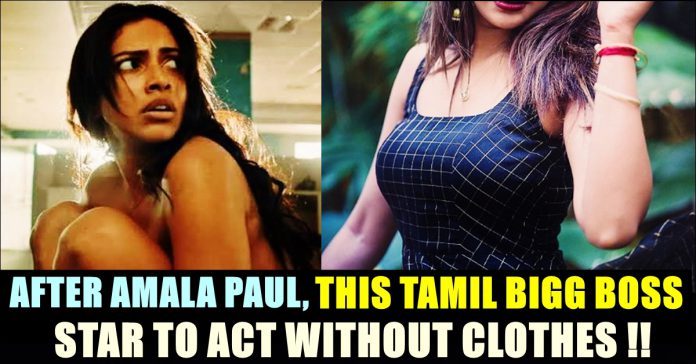 Amala Paul’s experimental socio-thriller “Aadai” brought the actress a wide attention. The film which was directed by “Meyadha Man” fame Rathna Kumar, had actress Amala as a media anchor with high spontaneity, courage and sense of her own feminist ideology. In a major part of the film Amala Paul appeared in front of the screen without clothes which was considered as one of the bravest stunt in the year 2019.

Now another heroine of Tamil film industry has decided to do the same, considering the demand of her movie’s plot. Aishwarya Dutta who debuted to tamil film industry through “Tamizhukku Enn Ondrai Azhuthavum”, has finished shooting for an important scene of her upcoming film “PUBG” without clothes. The film “PUBG” is being directed by Vijay Sri G. The title PUBG refers to “Polladha Ulagil Bayangara Game” and the director of it has already made Dhadha 87 by having Charu Haasan in the lead.

The nude scene of Aishwarya Dutta was shot on Thursday, according to sources. Sources revealed that the actress accepted to act in the film after realizing the importance of it in the story. The film crew got stunned and lauded the dedication level of the actress. Apart from Aishwarya, the film also has debutant Anthira Nair, Nivetha Buddula, Shanthini in the key roles. The film also has Bigg Boss season 1 fame Julie in an important role.

Some magic ✨. On camera- @crackjackphotography Make up and hair by – @b3bridalstudio …m in love with this one… Costume by- @studio149

Aishwarya Dutta rose to fame among Tamil audience for her stint Bigg Boss reality show. Her atrocious behaviour inside the house gained her so many haters but however she ended up at runner’s position in the season which was won by Riythvika. Apart from PUBG, Aishwarya is acting in a film with her co-contestant of Bigg Boss Mahat Raghavendra which was titled as “Kettavannu Peredutha Nallavan da”. She is also committed with a project named as “Aleka” which has actor Aari in the lead.

The death of Fathima Latheef, a student of IIT Madras created massive outrage in the state. 19 year old Fathima Lateef was from Kollam,...