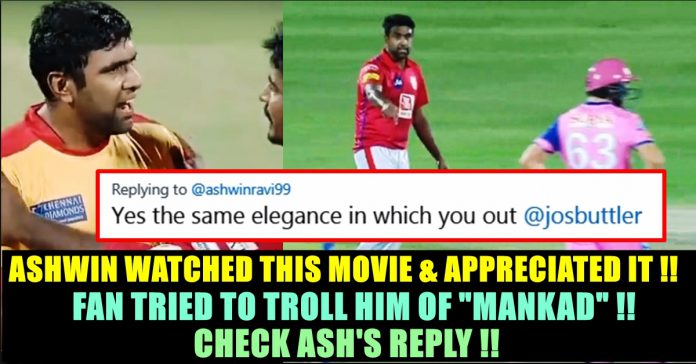 However Kings 11 Punjab failed to reach the play offs and Ashwin who was not in the world cup squad have initiated a talent hunt in his Gen Next Cricket Institute. Now the cricketer who is pretty much active in twitter posted a tweet about recently released Malayalam film “Kumbalangi Nights”

After watching the movie, the off spinner who couldn’t resist himself from sharing about it, in his twitter account said “What a beautifully crafted movie this kumbalangi nights is!!! ☺️simple story line but such elegance”

What a beautifully crafted movie this kumbalangi nights is!!! ☺️simple story line but such elegance

However, one his follower reminded him of the “Mankading” incident to troll the cricketer. The user wrote “Yes the same elegance in which you out
@josbuttler”

Yes the same elegance in which you out @josbuttler

But Ashwin who is known for his witty instant replies in Twitter, has not failed to do it in this occasion as well. He is also  is known to be straightforward with his comments and opinions and interestingly, he decided to reply to this random Twitter user’s message. In his reply he wrote “Of course.. precision🤙🏽”

He also replied to one of an Ajith fan who asked whether he watched “Nerkonda Parvai”. Check out his reply here :

Ashwin plays for Tamil Nadu in domestic cricket and captains Kings XI Punjab in the Indian Premier League. He is the fastest Indian bowler (also in some records the fastest in the world) to reach the 50-, 100-, 150-, 200-, 250- and 300-wicket mark in Test cricket. In 2016, he became the third Indian to win the ICC Cricketer of the Year award. 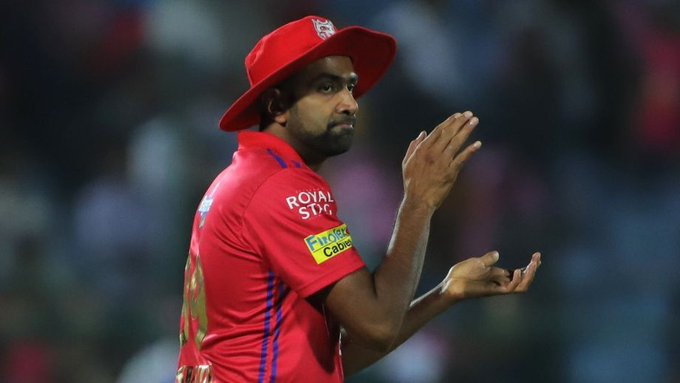 Having achieved little success as an opening batsman at junior-level cricket, Ashwin dropped down the order and turned into an off-break bowler. He made his first-class debut for Tamil Nadu in December 2006 and captained the team the following season. But it was not until the 2010 Indian Premier League in which he played for the Chennai Super Kings, that he came into the limelight with his economical bowling and earned his maiden international call-up in the limited-overs formats in June 2010.

What do you think on this reply of the cricketer ?? Comment your views !!

Previous articleTop Director Left Twitter Because Of Dangerous Threats From Modi Supporters !! SHOCKER !!
Next articleChinmayi Responds To An Abuser Who Termed Her Press Meet Video As “Hot Show” !!