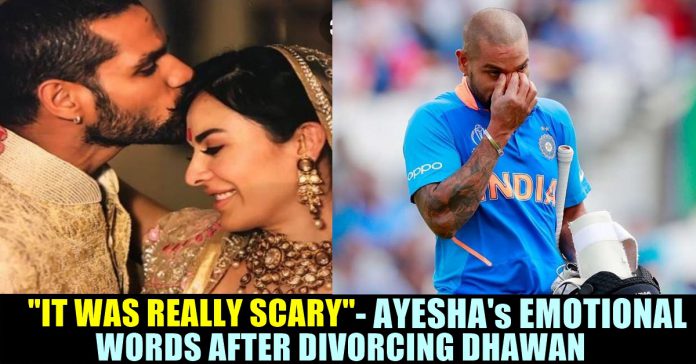 Aesha Opens Up About Divorcing With Shikhar Dhawan!!

Aesha Mukherjee, wife of Indian cricketer Shikhar Dhawan has announced their divorce. She has posted an emotional note on Instagram with this regard.

Aesha Mukherjee was a divorcee and had two daughters while marrying Shikhar Dhawan. The couple got to know each other through Facebook and they fell in love. They got married in the year 2012. After eight years of marriage, Aesha has announced their divorce on her Instagram account, @apwithaesha on Tuesday. The couple has a kid, Zoravar. Aesha was a Melbourne-based amateur boxer at the time of their wedding. In most of the matches, Ayesha and Zoravar were present to support Shikhar. Shikhar Dhawan is currently in UAE for the upcoming Indian Premier League.

Aesha has in her Instagram post has mentioned that it is terrifying to undergo divorce for the second time. She has shared her personal experience and has also made claims that intend to break the stereotypes clinging around divorce.

Many people have commented on this post. Some people have supported while few are really shocked by the divorce. Here are several comments:

Previous articleVideo Of Public Worshipping A ‘Burning Kid Goes Viral !! Internet Reacts
Next articleYashika Anand Announced About Her Next Film After The Tragic Accident !! Check Reactions

Ravichandran Ashwin Got Extremely Irritated On Seeing Ajith, Vijay Fans Fight !! Check What He Has To Say !!

A Facebook post which was uploaded in the year 2014 by the official handle of Actor Vijay has garnered the attention of the social...