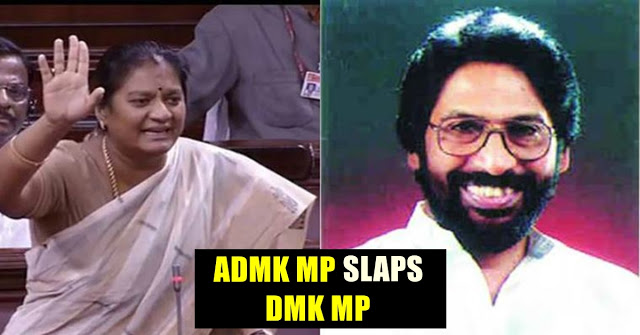 Both had landed separately at the airport departure terminal after the Parliament session to return to Chennai by Jet Airways flight 9W-854. At the airport, to the surprise of other passengers, Pushpa walked up to Siva and slapped him. CISF personnel intervened and separated them. Siva left the airport without preferring any complaint with police.

Pushpa told TOI, “I noticed Siva while collecting my scanned luggage. Suddenly, he started goading me by making remarks against the AIADMK government and Tamil Nadu chief minister. I ignored him for some time, but lost cool as he continued with the tirade and hence slapped him.”
Onlookers said Siva decided to skip the flight once he realized that Pushpa was also travelling in it. As Siva was leaving, she walked up to him, held him by his collar and slapped him. The gold chain that he was wearing snapped in the melee. Asked if she knew about his destination, she said, I was coming back to Chennai, but did not know about his travel plans.” She continued her travel as scheduled, she said.

Siva, despite repeated calls from TOI, did not respond. He apparently told a section of media that he had no idea as to why Sasikala Pushpa attacked him. The two MPs have been having problems between them ever since some morphed photographs were circulated in the social media during the run up to the recent assembly election in Tamil Nadu.

And as a consequence of this incident Sasikala has been terminated from the party with immediate effect and removed from her MP post as well..
Read about the consequences here!

“Jai bhim” Director Reacted To The Accusations Of Maridhas!!