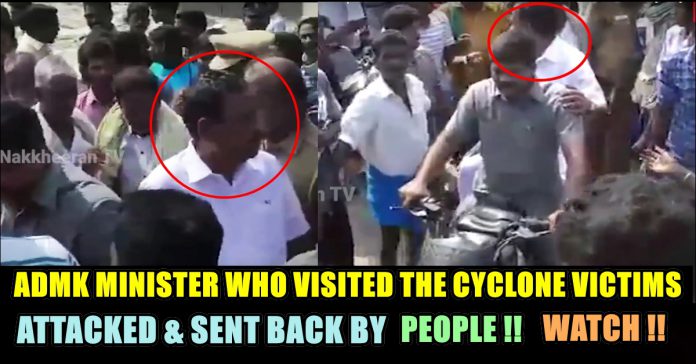 Tense moments prevailed at Kannithoppu near Vizhunthamavadi on Sunday when a group of protesters tried to assault Handlooms Minister O.S. Manian.

According to sources, a group of about 200 people hailing from coastal villages near Vizhunthamavadi staged a road blockade in protest at what they described as the tardy pace of relief operations. 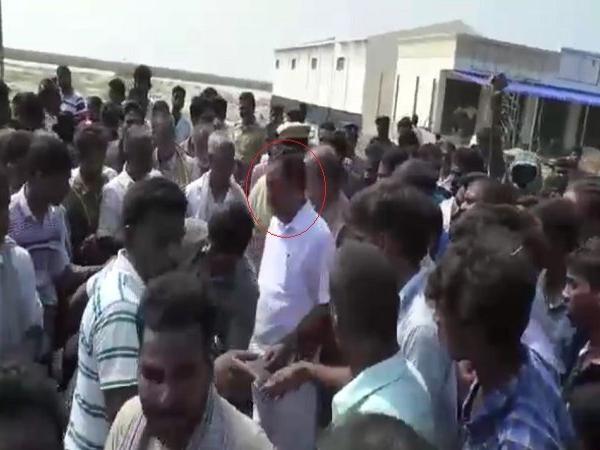 Tamil Nadu minister O S Manian’s convoy was on Monday attacked when he went on a visit to Nagapattinam to assess the situtation of the region after Cyclone Gaja hit the southern state last week.

In the video,  Manian can be seen surrounded by angry protesters who are shouting at him and asking him to leave the spot. Following that, the minister tried to escape on a bike and he was again confronted by the people.  This prompted the police to intervene and escort Mr. Manian to safety. But the protesters then smashed the Minister’s car and hurled stones at the police personnel. A few personnel were reportedly injured in the incident. The police brought the situation under control by using mild force.

The cyclonic storm crossed Tamil Nadu and Puducherry coast between Nagapattinam and Vedaranniyam on Thursday last week and unleashed mayhem in Tiruvarur and Thanjavur districts as well.

The toll in Cyclone Gaja has touched 45, Tamil Nadu Chief Minister K Palaniswami said yesterday. The state government has announced a compensation of Rs 10 lakh to the families of each of the deceased from the Chief Minister’s Public Relief Fund. Those with severe injuries would be provided with Rs 1 lakh each while those whose injuries that are not grievous in nature would get Rs 25,000 as compensation. Nearly 2.50 lakh people were provided with accommodation in 483 relief camps. Besides, 1,014 mobile medical vans have been set up and so far one lakh people in affected areas have benefited from it, the chief minister said.

Previous articleThese Emotional Memes From The Online Users Shows How Bad The Situation Is !! Check Out !!
Next articleThis Reviewer Asks Stalin To Donate 10 Crores For Cyclone Affected People !! Check Out !!

A video of Chief minister Edappadi K Pazhaniswamy advising people not to hurt a cow which interrupted the campaign is trending in the social...

Not many days ago, an elderly woman who attacked actress Samyuktha Hegde in public for wearing sports bra, apologized to the actress after receiving...