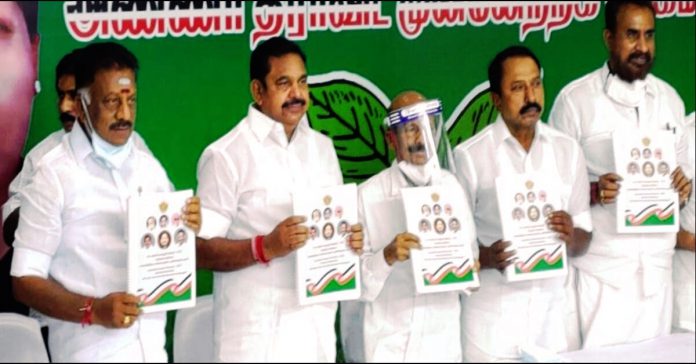 On Sunday, ruling government AIADMK has released its election manifesto in Chennai and it mainly targets the women of the state. Among its promises are Amma washing machines, travel concessions for women, implementation of the Amma banking card scheme and dual citizenship for Sri Lankan Tamils. At least one person from each family will be provided a government job, the party has said.

It is notable that late chief minister J. Jayalalitha provided free mixie, grinder to reduce the work load of home makers. Now, in a way of reflecting the policies of their leader, the current AIADMK government has released a manifesto to support the women in the state.

Amma Washing machine, 50 % concession for women in bus fare, a bank deposit of Rs. 1500 every month through “Kulavilakku” scheme are some of the main aspects in the manifesto released by AIADMK. It was also announced that the maternity leave for the women who work for government will be increased to 1 year. To provide loans for the women of self help group, a separate bank for women will be inaugurated, said the manifesto which also promised to increase the reservation for women in government jobs to 40 %.

The AIADM manifesto promised to increase the amount of marriage allowance and said that silk clothes, silver anklet and home appliances for the newly married couple will be provided. Reports says that women in the state felt extremely happy on knowing about the manifesto released by AIADMK as believed that their promises are essential.

Previous articleVijay TV Removed The Particular Part From “Cooku With Comali” Show After Receiving Backlash From Fans ??
Next articleAnitha Exposed A Fraud Who Cheated Girls In The Disguise Of A Casting Director !!

OMG : These IPL Players Earned This Much For Every Run They Scored !!

The IPL 2018 is near to its end with Chennai Super Kings (CSK) being the first finalist and soon we will get to know...