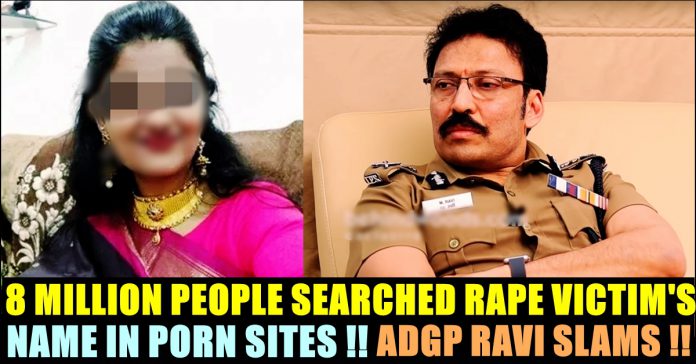 Now in a recent interview with Behindwoods, the police officer explained the process of catching the culprits in detail. “Child pornography is illegal across the world. No website in this world contains such videos as of now. But few miscreants are manufacturing such kind of videos and spreading it. To stop them from involving in such violence, we are gathering their details from ministry of home affairs in order to take appropriate action against them” said the IPS officer.

The officer further says that he got shocked and astonished to know about the state of Tamilnadu and Chennai. “On seeing the contents they have watched, we became so emotional. In a state like Tamilnadu which is known for its culture, we couldn’t believe that they have searched for that content. We even have the list of the videos an individual watched” he said.

Watch the full interview of him here :

Answering to his question, ADGP Ravi said that it shows the hypocrisy of the public. “It is really shocking. In public platforms such as Facebook and Twitter, people are sympathizing the victim. On the same time they are searching the details of the victim in pornography sites shows the hypocrisy. This attitude among youngsters must change. If we examine such fellows, we could see their personality disorder causing these kind of troubles. Their upbringing is one of the main reason for the way they see children and society. Just because of a police action, it is not going to get solved. Schools, Society and parents should identify such people and should give proper counselling to them which is the only way to stop this issue” Mr. Ravi said in the interview.

Through his interview we can clearly understand that unless or until one really acts in a way of encouraging sexual crimes against children, women they could not be punished under any kind of law. What do you think on this move of Chennai Police ?? Comment your views below !!

Officers of Income Tax Department has disclosed the salary details of actor Vijay for his latest released two films. The officers who went to...

"Parithabangal" fame Gopi and Sudhakar came up with a clarification video in their you tube channel to brush off the allegations that were made...