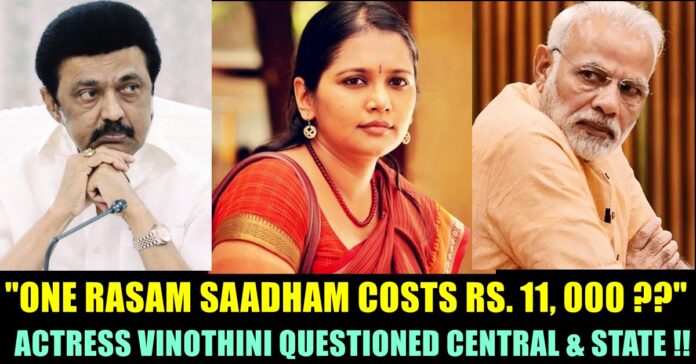 Actress Vinothini who predominantly appears in Tamil films in strong supporting roles, is currently involved in making thoughtful comedy videos based on the current affairs and relatable happenings through her Instagram handle “The Vinothini”. In one of her recent reel videos, the actress made fun about the GST taxes imposed on the citizens of the country and expressed her concern about how people are suffering.

Enjoying more than 1 lakh followers for her Instagram handle, Vinothini is busy engaging her followers through her thoughtful videos. Some of her videos grabbed the attention of mainstream online users and her recent video about GST tax imposed by state and union government is as such.

In the video, she could be seen pretending herself as an owner of a hotel and enacted how charging bill is being calculated nowadays due to the emergence of GST tax. “Oh, You ate Rasam Sadham ? so there will be separate GST taxes for “Rasam” and “sadham”. You should pay separate GST taxes for Ghee, Dalda, mustard seed, oil, the vessels that were used to cook the food, stove and the cylinder” Vinothini said in the video to an imaginary customer.

“You have 10 fingers ?? Pay GST for that too. That could be your fingers but you have used it to eat, right ?? It should be paid for both the hands as you must have adjusted the leaf with your other hand. Nose GST is also applicable as you must have smelled the food item” the actress further said.

At the end, Vinothini said that the bill amount for one Rasam sadham is Rs. 11,000 as state government would add their GST to it. She also said that it is each individual’s fault that they are not born as a billionaire and made fun of those who believe that they could earn and become billionaires in a sarcastic tone, condemning the government. The actress, indirectly talked about how employees are underpaid in her video as well

Uploading the video, she wrote “Why were we all not born billionaires? GST (or taxation on products by the state) on top of GST (from the centre), and where will we all soon be? In No Man’s Land, unless we are billionaires. It’s no longer a case for rich will get richer, poor will get poorer. It’s now Rich will Survive, Poor May very soon Die” as her caption.

The actress also trolled a follower who criticized her video by calling her as “Boomer”. When another follower said that there will be an income tax raid in her home for making such video, Vinothini said that there are only dog and cat vessels in her house, denoting that the officials will be disappointed.

here’s the screenshots of her replies : 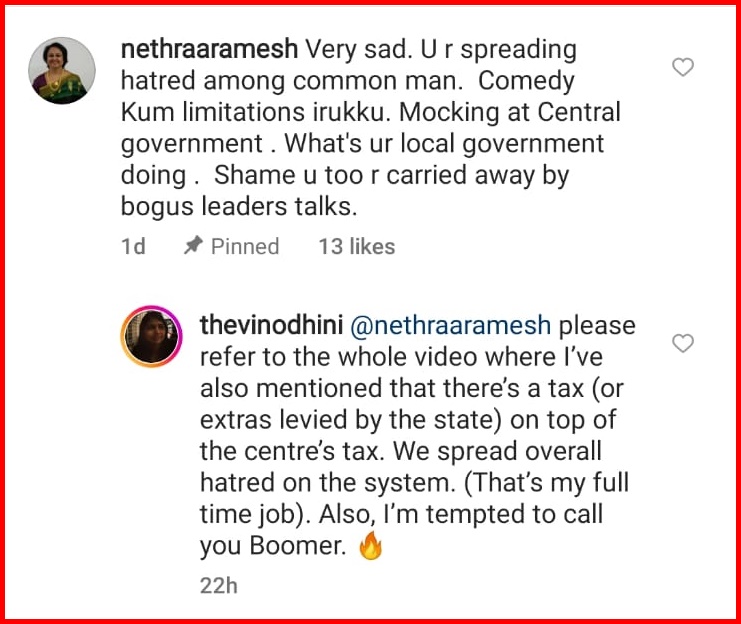