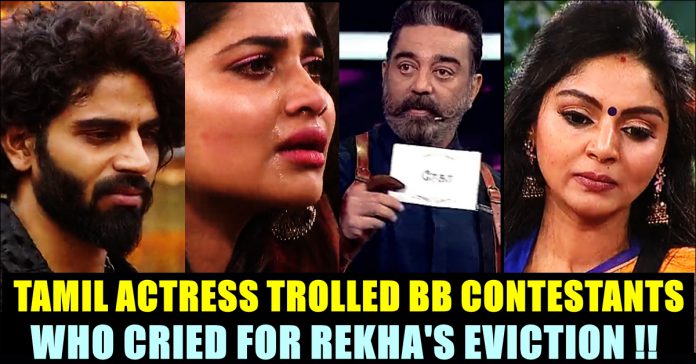 A number of contestants shed tears when Kamal Haasan announced that actress Rekha is getting eliminated from the show. Shivani Narayanan, Balaji Murugadoss, Rio raj are some of them who got extremely emotional and gave her a warm send off. Veteran actress Sripriya who has been watching the show for past three seasons, made fun of those contestants by comparing them to a answer said by Dharmar in Mahabharata.

Veteran actress Rekha became the first participant to get eliminated from the season four of Bigg Boss show which is being hosted by Ulaganayagan Kamal Haasan. Between Sanam shetty and Rekha, followers of the reality game show decided to eliminate Rekha by casting her the less number of votes. While getting eliminated, Rekha said that she doesn’t entered the show to achieve milestones. “I came in to experiment myself. It was fun. Unlike people’s assumption, this show is not a scripted one. It’s people’s behaviour that changes time to time” she said in her speech before leaving the set.

Actress Rekha who acted with Kamal Haasan in “Punnagai Mannan”, made her entrance with all smiles and received the warm welcome of Kamal Haasan. Inside the house, Rekha had a good bonding with almost all the contestants. Balaji Murugadoss and Shivani left dejected on hearing about her eviction. They looked extremely emotional and shed tears on knowing that Rekha is going to leave the house. Rio Raj also cried after she gave him her plant. Not only them, almost all the other contestants were seen sad.

Rekha gave her lucky coin to Shivani Narayanan with whom she had an emotional bonding during her time inside the house. Now, comparing the incident with a Mahabharata story, actress Sripriya who is known for pairing up with Rajinikanth and Kamal Haasan during her prime, posted a tweet in her official twitter account.

“a story in Mahabharata,Dharmar answers a yakshan’s questions,1of the question is what is the biggest joke of the world and Dharmar says1who is going to die tomorrow crying for the1who died today, this was reminded watching the contestants of BB crying for the evicted contestant” her tweet read.

a story in Mahabharata,Dharmar answers a yakshan’s questions,1of the question is what is the biggest joke of the world and Dharmar says1who is going to die tomorrow crying for the1who died today, this was reminded watching the contestants of BB crying for the evicted contestant😕

This comparison of the actress was lauded by her followers who watch Bigg Boss. Check out some of their reactions below :

Maybe, who are cried need some attention in front of camera.

A 16-year old Hindu boy who had run away with a minor girl was beaten up by a group of men at Dewas in...

The craze for IPL is increasing day by day as the tournament is progressing towards the finals. Among the 8 teams which are participated,...

“JAWAN Is A Story Of A RAW Agent” – Twitter User!! Editor Replied

Reacting to the alleged story of Atlee's upcoming film "Jawan", editor Ruben who is known for editing the previous films of director Atlee, came...