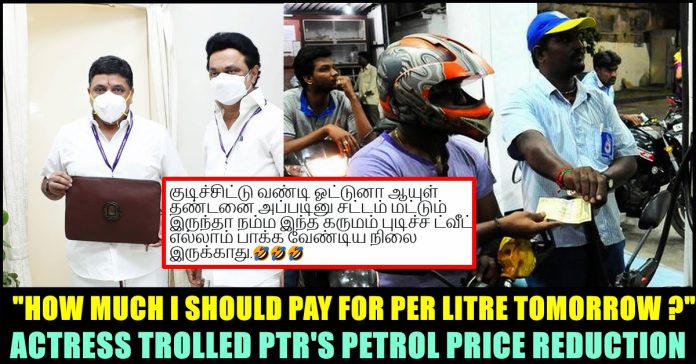 Actress Tried To Troll PTR For Reducing Rs. 3 From Petrol Price !! Got Trolled

While presenting the state budget, Tamil nadu finance minister PTR announced that the petrol price has been cut by Rs. 3. “2.6 core people in Tamil Nadu use two-wheelers. We have reduced ₹ 3 in petrol price, and due to this we will face a ₹ 1,160 crore deficit,” Mr P.T Thiagarajan said, according to the reports. With a set of people welcoming the move by the TN government, many could be seen criticizing the Stalin led government as well.

“Have fuel prices been reduced? I thought it was only petrol price and not diesel. Most goods are transported using diesel vehicles. 2 wheelers will be the main beneficiaries. It will help but is hardly going to make a huge impact on commodity prices.” said Political analyst Sumanth Raman in his tweet. Meanwhile BJP member Gayathri Raguram uploaded a tweet trolling the finance minister of the state. In reply, she got trolled by the users of Twitter who referred to an incident where the actress was accused of driving vehicle with alcohol influence.

It is notable that this was the first budget presented by the Dravida Munnetra Kazhagam government of Chief Minister MK Stalin after the party swept the assembly election in April , 2021. Fuel prices have been rising across the country and have breached the Rs. 100 mark in several other states. Entire country, including the leaders of opposition parties have been criticizing runaway fuel prices.

She also criticized the government’s stance on providing Rs.1000 for home makers. On reading about the government saying that qualified home makers would get the money, Gayathri said “100 days is not enough to know who deserves Rs. 1000/-? I’m sure the government has enough detail.” through her tweet.

Check out some of her reactions her tweet received :

whatever ur PM says minus three rupees

First of all don't drink and drive 😂

You need to ask Modi because tonight they might increase the tax again😂!! You must ask this question standing in front of mirror !!

Ask Modi not to increase the Tax on Petrol by Rs.3 to compensate the price Reduction by TN Government

What you boss in center mentioned that they would bring down the fuel prices by 50% from what was done in 2014. whereas they achieved this by increasing this by 50%