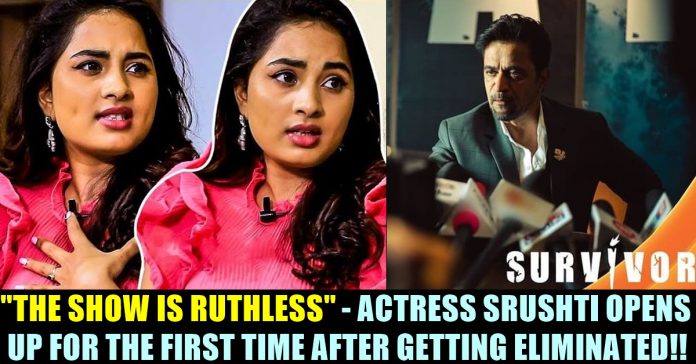 After getting eliminated from the reality show, Srushti Dange, known for her roles in movies like Megha, Darling, Dharmadurai, has posted a post on Instagram. In the post, she has written a caption articulating her emotions.

Survivor is a reality show launched on Zee Tamil. The show was first aired on September 12, 2021. This show is a replica of the American show, Survivor. The American show, in turn, is an adaptation of the Sweden show, Expedition Robinson from the year 1997. In Survivor Tamil, 18 participants are taking part. These participants are well-known faces among the people. Competitors are taken to a forest in Africa and are given made to face 90 days challenge. As the show progresses participants are also eliminated based on their performance. The participant who survives the tasks and the hardships will receive an award of Rs. 1 Crore.

Recently, Srushti Dange was ruled out from the show. After losing a task against Gayathri Reddy, Srushti Dange was eliminated. After leaving the show, Srushti has posted an emotional goodbye post. In the post, she has shared her complete experience in the show and expressed her gratitude to Actor Arjun and Tamil Nadu.

Srushti’s fans have commented on her post wishing her and conveying that she will be missed.