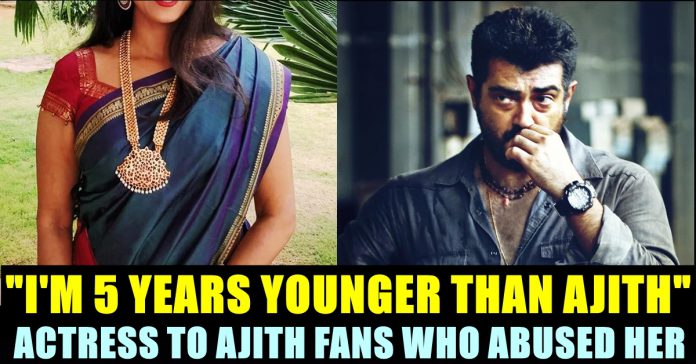 Actress Kasthuri Shankar has been calling out the fans of Ajith kumar for quite a long time in Twitter. The 45 years old actress has been facing cyber abuse by a group of people who are projecting themselves as the fans of actor Ajith kumar since very long time. In several occasions, Kasthuri caused a Twitter trending against those people for involving in abusive conversation against the actress.

She grabbed the headlines recently for being the cause for the hashtag #DirtyAjithFans to trend nationwide. The incident happened months back but the actress is still continues to slam the alleged fans of the actor in the micro blogging social media platform. Kasthuri enjoys more than 2 lakh followers in Twitter, through which she has been expressing her thoughts and opinions on politics, public and social issues.

On Sunday, a twitter user with actor Ajith Kumar’s display picture uploaded a video of Kasthuri’s old song with Prabhu and made derogatory comments against the actress and called her as “Granny”. He added #ThalaAjith #Valimai #AjithKumar as his hashtags.

Kasthuri who got tagged in this post, asked why they are involving in such cheap activities. “Did Ajith sir ask you guys to talk abusive language by keeping his picture ?? This funniest thing is , Kasthuri “Kizhavi” is five years younger than Ajith” Kasthuri said in her tweet.

Followed by this, Kasthuri posted two more tweets by posting the screenshots of their abusive conversations about her. “I Humbly request no one to use this as an opportunity to defame Mr AjithKumar , who is a perfect gentleman that I admire a lot. Those who say are proud to be his fans, please make him proud of you! Please do not indulge in such cheap activities.” she wrote.

I Humbly request no one to use this as an opportunity to defame Mr AjithKumar , who is a perfect gentleman that I admire a lot.
Those who say are proud to be his fans, please make him proud of you! Please do not indulge in such cheap activities.

The fan wars and verbal abuses in social media platforms are increasing in daily manner. Ajithkumar is enjoying a huge fan base in the state, despite of dismantling his fan clubs in the state. Though majority of them are involved in praising their favourite actor and in celebrating his movies, few of them are involving in fan fights and cyber bullying. It is notable that Ajithkumar, in his recent press release, requested his fans to concentrate in their studies and in fulfilling their responsibilities.

A massive announcement on the sequel of Selvaraghavan's epic historical drama "Aayirathil Oruvan" surfaced on the special day of New year. As the film...