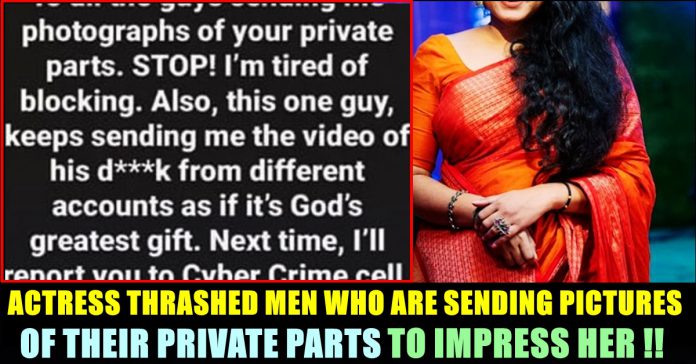 Actress Anumol who is known for her works in Malayalam film industry, expressed her frustration on receiving pictures of private parts of random men in social media platforms, especially in Instagram. Social media is definitely not a good place for cinema celebrities, especially for female actresses as they are constantly receiving trolls and abuses in daily basis. Many would ignore them but when it exceeds its limits, female celebrities like Anumol are forced to publish open statements against them.

Anumol is known for appearing in Malayalam films such as Chayilyam, Ivan Megharoopan, Akam, Vedivazhipadu and Jamna Pyari etc. The 32 year old actress, on receiving several nasty pictures and dirty messages from various men, posted a long note teaching them a right lesson to help them realize how bad it is.

The actress said that she is tired of blocking them all. She pointed out a particular guy who was sending pictures and videos of his private part from different accounts and threatened to make a complaint against him in Cyber cell. The actress also issued a message to all those who are trying to impress girls by sending pictures of their private parts. Anumol said that it doesn’t result in any other emotion that Disgust.

“To all the guys sending me photographs of your private parts. STOP! I’m tired of blocking. Also, this one guy. keeps sending me the video of his d**k from different accounts as if it’s God’s greatest gift. Next time, I’ll report you to Cyber crime cell. Also, for all the douchebags sending women such pervert images, know this. It certainly doesn’t result in any other emotion than Disgust” she wrote in her story.

Few days ago, a similar statement was issued by a popular journalist Panimalar Panneerselvam. Panimalar also said that women feel no emotion other than “disgust” while seeing such pictures.

“I can’t understand the psychological mindstate of men who sends their naked pictures. If you guys are thinking that girls would fall for that, sorry brothers, we feel nothing but “disgust”. I have read that women were not created in a way to get attracted to a man’s body structure (Exceptions may exist).” said Panimalar in her tweet to make men realize the real state.

“We know that Masculinity of a man doesn’t depend on a particular body part. Beyond that we are witnessing men who proves themselves as real men through their activities in daily basis. We are not getting committed to them in a romantic relationship or in a physical relationship. In that case, you are not even near to close in getting our attention. Only Discipline and Good habits could attract someone, not indecency” she said in her tweet.

It is high time for men to stop harassing women in social media accounts by sending their nudes, instead of getting exposed. Comment your views on women receiving such punishment from men for doing absolutely nothing !! 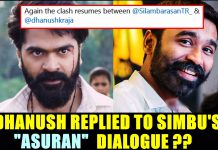 Dhiwaharan Palani - January 21, 2021
0
As soon as Dhanush changed his twitter bio into "ASURAN", users of the micro blogging social media site started believing that the...