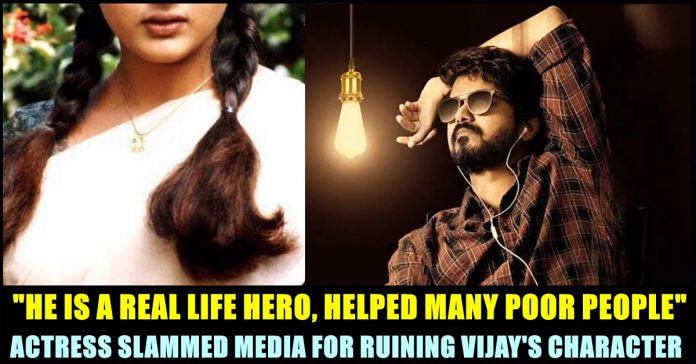 Actress Gayathri Raguramm, president of BJP Tamil Nadu’s, Art and Culture Wing came up with a tweet supporting Vijay regarding the recent judgement provided by Madras High Court on a petition filed by the latter in the year 2012. She said that Vijay has always been a real life hero to many poor people and pointed out his donations to the COVID 19 PM and CM care funds. Gayathri also said that the actor had helped many students for education and slammed media for maligning his character and believed that public cannot assassinate Vijay’s good deeds for one court matter.

Judge Subramaniam of Madras high court imposed Rs. 1 lakh fine for actor Vijay who sought tax exemption on a luxurious car that got imported from foreign. It has been reported that the “Gilli” actor imported a Rolls Royce car from England in the year 2012. He was asked to pay entry tax by the Assistant Commissioner of Business Taxation. Followed by that, Vijay filed a petition in Madras high court in the year 2012, seeking exemption for the entry tax.

Trolls emerged from all the directions of Internet criticizing Vijay. Reacting to them, Gayathri Raguramm uploaded a tweet writing “Vijay has always been a real life hero to many poor people. He has donated for COVID PM care funds and CM care funds. He has helped many students for education. He Helps his fans (family). Media should not malign ones character. The matter was in court and ends in court. We should not forget the help. For one court matter we cannot assassinate his good deeds.” and supported him.

We should not forget the help. For one court matter we cannot assassinate his good deeds.

“If he had not voiced those unnecessary dialogues in his movies there wouldn’t have been so much damage. Please remember that this is not against the noble individual Vijay, but against the opportunistic actor Vijay who made politics in his movies.” a user commented to which Gayathri replied saying “Dialogues are not only actors fault. the entire crew should have cross checked some facts. Dialogues are directors responsibility. Actors don’t do research. Censor is also to be blamed.”

Dialogues are not only actors fault. the entire crew should have cross checked some facts. Dialogues are directors responsibility. Actors don’t do research. Censor is also to be blamed.

Previous articleHashtags Trending At National Level For The Judgement On Vijay’s Rolls Royce !! CHECK OUT
Next article“Being Mapla Is Not An Easy Task” – Vijay’s Best Friend Tweets On The Rolls Royce Issue

Vanitha Vijayakumar Expressed Her Dejection Over Her Own Family Members !!

Former Bigg Boss contestant and actress Vanitha Vijayakumar came up with a post in her official Instagram handle, expressing her emotions over the demise...