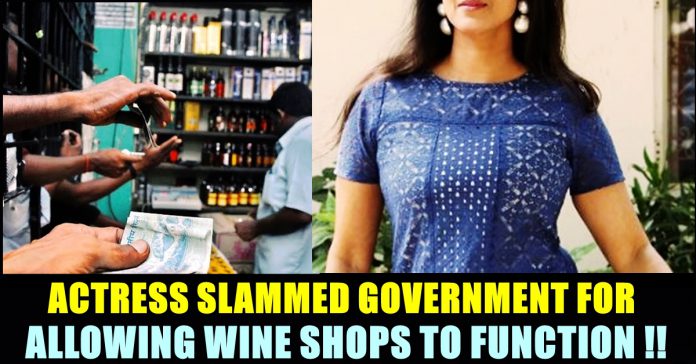 Actress Kasthuri who is known for voicing out for social issues has slammed government for allowing liquor shops in green zones from 4th of May. The central government announced that it is going to extend the lockdown period on Friday. The lockdown is getting extended for third consecutive time and this time it is going to be two weeks from 4th May to 17th. Earlier today. the government divided all the districts in the country into Red, Orange and Green zones, considering the spread of corona cases. Despite the lockdown extension, the new MHA order provides several concessions in Green and Orange zones. The Red zone required to continue shut as the previous two lockdowns.

As far as Lockdown 3.0 is concerned, No travel through air, train or metro is allowed. Movement between interstates has been prohibited. School, Colleges and other educational centres should remain shut. Hotels, Restaurants, Malls, Theatres, Gyms, sports complexes should not function in the third lockdown as well. In all zones, persons above 65 years old, persons with co-morbidities, children below 10 years of age and pregnant women should stay at home unless if there is any medical requirement. All religious places should remain closed. People movement between 7 am to 7 pm is prohibited.

However, Shops, selling liquor, paan, gutka and tobacco will be allowed in green and orange zones. People are advised to maintain six feet distance and not more than five people at a time. In the orange zones, Taxis and Cabs can be operated with one passenger. Cars can have have two passengers besides the driver and pillion riding will be allowed on two wheelers.

On seeing government allowing liquors in Green and Orange zones, Actress Kasthuri said that she is severely condemning this act of the government. She said that every citizen of (alcoholic men) will have urgent requirements in Krishnagiri and Pondycherry as they are announced as green zones by the government. As Tamilian are starting to live without alcohol, this decision from government is highly condemnable, she said in her tweet.

However, the only green zone in Tamilnadu Krishnagiri has recorded its first positive case earlier today. A 67 year old man who has a travel history to Puttaparthi of Andhra Pradesh had returned to tamilnadu on 25th of April. As the first case was registered, Krishnagiri will no longer get relaxations and will have to follow the norms of the orange zone districts.

In the Green zones, all premises will reopen except those banned across the country. But in these areas, buses can operate only with half the seating capacity. As soon as the news surfaced, users of Internet couldn’t keep calm as they storming the social media platforms with memes and reactions.