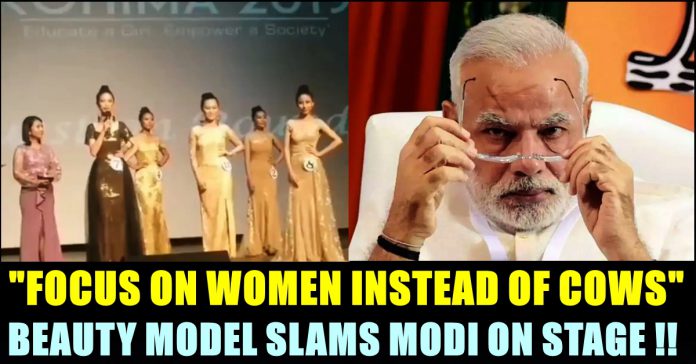 Kasthuri a famous actress in Tamil cinema, known for films like Indian, Tamizh Padam etc. She recently participated in Tamil Bigg Boss show as wild card contestant and got evicted in the first week she got nominated. She began her acting career in 1991 in Kollywood and has been subsequently associated with Tamil films. Prior to acting, she has been a model.

Not only for her film appearances, Kasthuri is also known for her existence in social media platforms. She never shied away to post her opinions on political happenings. Her controversial tweets and verbal spat with the followers, often grabbed the headlines.

Now, in a recent tweet, Kasthuri shared a video of a model answering to a question related to Prime Minister Narendra Modi. The video shows, the model who is one of the contestant of a Miss Kohima 2019, was asked what she would say to Modi if he invites her for a chat.

The model immediately responded by saying that she would ask him to focus more on women (Women safety) instead of cows. Sharing this post, Kasthuri wrote “During Miss Kohima 2019 beauty pageant, a contestant was asked the qn:”if Prime Minister of our country Modi ji invites you to chat with him, what would you say?”She replied: “If I were invited by the PM of India, I would tell him to focus more on women instead of cows”.”

During Miss Kohima 2019 beauty pageant, a contestant was asked the qn:

“if Prime Minister of our country Modi ji invites you to chat with him, what would you say?”

She replied: “If I were invited by the PM of India, I would tell him to focus more on women instead of cows”. pic.twitter.com/EGd4tWbQdz

Check out some of the reactions for this video shared by kasthuri :

Oh A$$… defamed her country by criticising the PM in a Global platform, whereas she should have given a +ve picture about our country. This is bordering communalism, intolerance etc. She possibly has cryptic Agenda.

Just say something abt Cow, against Modi u will get headlines.its become fashion, don’t need to talk with any sense and people like Kasturi will gladly tweet it,As a PM he needs to protect all both animals and human ,it’s not this or that. did he not start Educate girls movement

If it weren’t her hate for a religion she would have said He should emphasise more on Women Security, Women upliftment. But when she belittles His worship, that is were the Communal Angel comes into play.

What do you think this video shared by Kasthuri ?? Comment your views !!