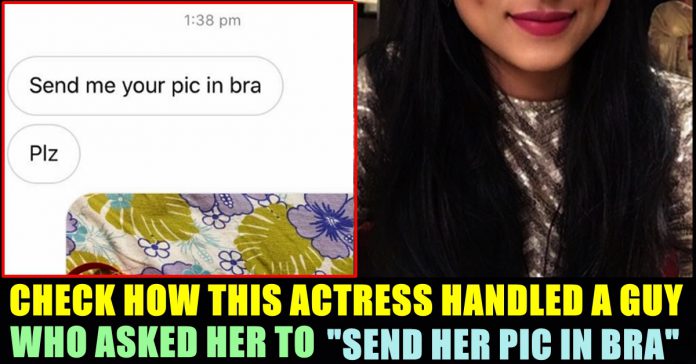 Since the announcement of 21 days lockdown from the Prime minister, people are killing time in various ways. Now, a young actress named as Aanchal Aggarwal who is known for appearing in popular hindi television series “Ek Bhram…Sarvagun Sampanna” as Sonali Mittal, found a new way to spend her quarantine time. The actress who is pretty much active in social media platforms, replied to a random online guy who asked her to send a picture of herself in brassiere.

Check out some of the Instagram posts of the actress :

People in social media platforms such as Instagram, Twitter and Facebook often thinks that the things they are sharing in a private inbox of someone else is going to stay private forever. But they must realize that it would become public sooner than they think and would spread faster than they assume. Aanchal who enjoys more than 20,000 followers and 17,000 followers in Twitter and Instagram respectively, received message from a guy who asks the actress to send her picture in bra.

The actress who decided to reply to him, captured the screenshot of her reply and posted it in her social media accounts which are still doing rounds. Aanchal replied to him with a picture of her inner wear along with a passport size photo placed on it, in a way of trolling him. She uploaded the post with a caption saying “Never disappoint fans”

As lomg as they’re not breaking my back. We good.

Well, blocking them might bring them back with a new account but giving them such humiliating replies are the right way to stop them right where they are. It is high time for social media users to think twice before sending such texts instead of deleting their account later.

Comment your views on the way Aanchal handled the guy !!

Ravichandran Ashwin found himself in the thick of the things after 'mankading' Jos Buttler during an Indian Premier League (IPL) match between Rajasthan Royals...

“Premam” Director Got Devastated About This Fake News About Him !!

Director Alphonse Puthren of "Premam" fame, on Friday morning, came up with a post in his official Face book account, expressing his dejection over...