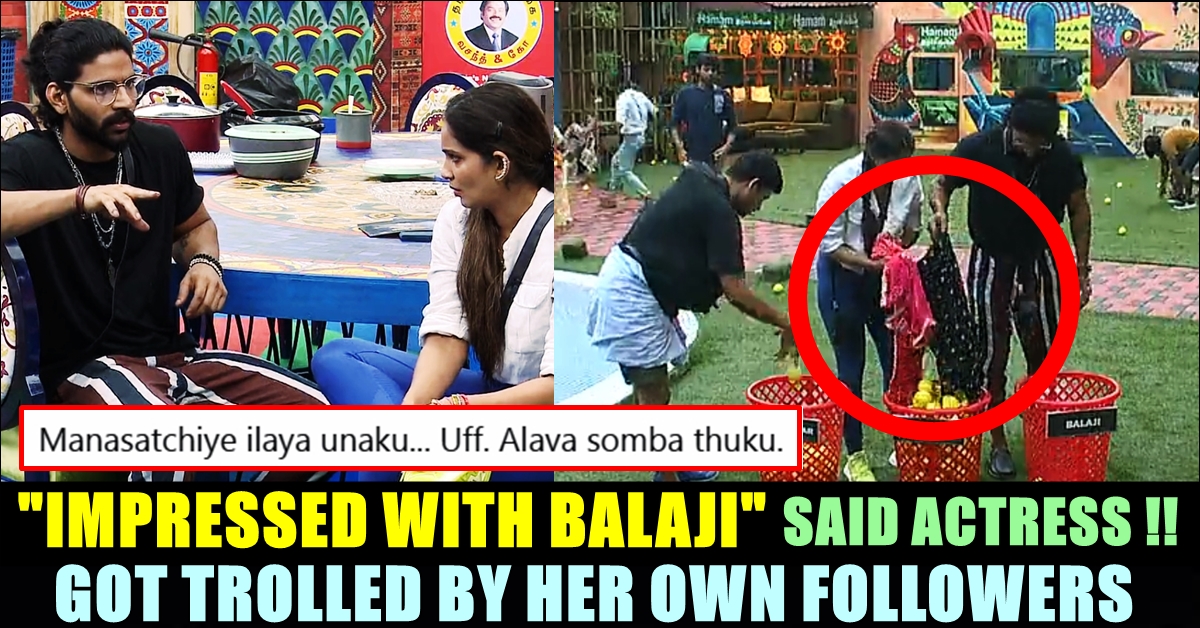 On the friday episode of Bigg Boss Tamil 4, captaincy task for the upcoming week was conducted. Samyuktha, Balaji Murugadoss and Somashekar were the contestants who competed with each other to become the captain of coming week. While playing the task, instead of going for a win, Balaji Murugadoss blatantly helped Samyuktha to win.

Bigg Boss provided a task to the three captaincy contenders to become the captain of the house in the coming week. They were required to save balls thrown by the other contestants in a basket given to them. The participant who collects the highest number of balls will be the week’s leader, said Bigg Boss. Instead of going for a win, Balaji Murugadoss made Samyuktha win by adding his balls to her basket.

Samyuktha’s basket had 262 balls whereas Som’s basket had 200 balls. Balaji’s basker contained only 4 balls. When he was asked why he is doing it, Balaji said “I decide who should become the captain”.

Later, Balaji, while talking to Aari said “Someone who cannot be influenced by others, should become the captain” as a reason for making Samyuktha win. On seeing these activities from Balaji Murugadoss, actress Sri Priya who paired with Rajinikanth and Kamal Haasan during her prime time, posted a tweet writing “Impressed…”

Followed by that, she posted another tweet writing “Impressed with the statement’a woman who can not be influenced should be the captain’” and showed her support to Balaji Murugadoss.

This tweet from her didn’t go well with some of her 5 lakh followers. They said Balaji is influencing Samyuktha by saying that statement. “Sam is influenced by Balaji… you can witness” wrote one of a follower whereas another one said “He is getting a proxy for him . nothing like woman leader etcrtc”

Few went one step ahead and trolled her for blindly supporting Balaji without analysing him. Check out some of their reactions below :

He is keeping his friends close and enemies closer.. He is playing a safe game where he will not get nominated…

Only statement right, but i am impressed with aari nachu question

she is very much influenced by bala and suresh . that statement is false

He is getting a proxy for him . nothing like woman leader etcrtc

isnt she already getting influenced by Balaji???? what mam you are always onesided…analyse panunga

Translation
A woman who will only be influenced by me should be the captain.

bala is planning Sam to be a dummy leader who will do as per his willing.. she is very much influenced by bala and his gang

I think Sam shouldn’t have accepted the captain post as it was an unfair game. I felt sorry for Som. If oviya was in that place she would’ve said no, it’s not fair to win in a short route

#Samyukta is big time #Sombyuktha . She is so cleaver, satisfying her personal grudge ( with #SanamShetty ) by becoming aide to Bala. #biggbosstamil4 #BiggBossTamil

Comment your views on this statement of Sripriya and the reaction she is receiving !!