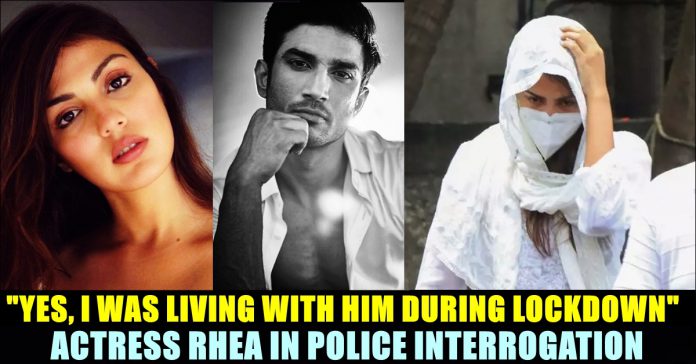 Rhea Chakraborty, girlfriend of Sushant singh Rajput confirmed her relationship with the actor and revealed that they were living together throughout the lockdown before she left his apartment due to a fight which broke out between them. She reached Bandra police station at 11 : 30 AM in the morning and left the station around 9 PM. She reportedly informed police officers about the details of their fight and showed them they were in touch via phone and text message after it. Rhea was the last person Sushant called before going to bed.

Rhea was questioned by the police officials about the behavioural changes of Sushant. She showed proofs to police officials regarding the treatment he was taking on for clinical depression. The actress said to police that he refused to take the medicine but instead he chose Yoga and Meditation to cure the depression. Sushant didn’t take his medications despite Rhea coaxed him to do it. About leaving his apartment after a fight, Rhea said “I did not leave the house on my own. I wanted to give him space to think for himself”

So far, Bandra police have investigated 13 people and recorder their statements as a part of the ongoing investigation regarding Sushant Singh Rajput’s suicide. Rhea further revealed that Sushant ended his contract with Yash Raj films, a high profile production house of Bollywood and asked her to do the same. The demise of the young talent, made people, media and police officials to doubt the biggies of Bollywood and the way they treat the newcomers, especially those who are not star kids.

The Bandra police have asked for a copy of a contract between Sushant Singh Rajput and Yash Raj films to be submitted for investigation. A report of Bollywood Life has said that Rhea even told cops that the apartment Sushant living was haunted. “That’s what I felt and even Sushanth felt disturbed while we were staying there” she reportedly told the cops. Sushant recently moved to a big duplex apartment in Mont Blanc that had three bedrooms and a large hall. The reports suggests that the actor was paying Rupees four and half lakh rent per month for that luxurious house.

Sushant Rajput singh died by suicide on 14th of June, at his Bandra, Mumbai home. The preliminary post mortem reports revealed asphyxiation by hanging as the cause of death. Sushant’s demise shocked the entire country as people started predicting the reason behind his death on their own. Enormous number of people blamed the “Nepotism” in Bollywood industry and trended hashtags against it. Social media followers of celebrities such as Karan Johar, Alia Bhatt are decreasing day by day as a result of the 34 year old’s death.

Previous articleSuresh Raina Wants This South Actor To Play Lead In His Biography !!
Next articleJovika Vijayakumar Defends Her Mother’s Decision !!

A reply made by France based model Fiona Allison to an Indian online user Rinku Pandey about the tradition of country India based on...