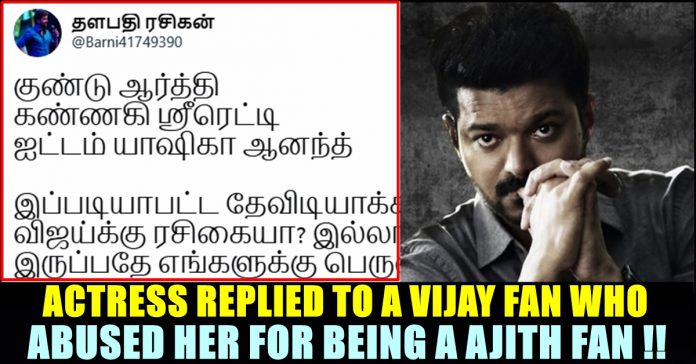 Fan wars in social media is common but strangely it is taking place even at this pandemic situation. As the people of country India are required to stay at home to avoid spreading the deadly virus COVID 19, they are finding more time to spend online it seems. Recently, a guy who identifies himself as a fan of actor Vijay posted abusive comments against female artists who earlier said that they are the fanatics of actor Ajith kumar. The abusive tweet he posted received more than 500 likes and 100 shares in Twitter, to out bizarre.

He abused actress Harathi, Sri Reddy and Yashika Anand for being a fanatics of actor Ajith kumar. In his tweet, he said that Vijay fans are proud for not having them as a fellow fanatics. “Thalapathy” Vijay and “Thala” Ajith are two of the most talented actors in the cinema industry of Tamilnadu. The rivalry between both the actors is less as far as the rivalry between their fans is considered.

It has been a long time since actor Ajithkumar and Vijay declared as official rivals. Though the actors themselves enjoying a healthy friendship between them, verbal spats between their fans has always been a never ending one. Then it took place in movie theatres but now as social media has been an easy accessible one to every smartphone users, they are involving in abusive verbal spats which caused many disgusting hashtags in Twitter.

Now, this particular twitter user whose handle name reads as “Thalapathy Rasigan” received a reply from comedy actress Harathi who is known for appearing in films like “Padikathavan”, “Pattiyal” and in reality game show Bigg Boss hosted by Kamal Haasan.

The actress, in her reply tweet said, “Brother, you say whatever you want, that’s your quality. But say it with your picture and with your original name. That’s the beauty of real man. Our Thalapathy also would like that only. Or else it will be like a dog barking at a full moon”

It is high time for the fans of these two top actors to realize that it is a time to be united in spreading awareness among public. Comment your views on these replies of actress Harathi !!