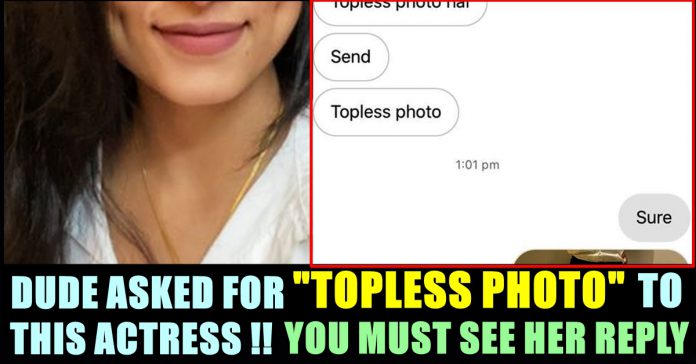 Actress Replied To Random User Who Asked For Her Topless Picture !!

Aanchal Agarwal who earlier trolled one her follower who asked for her picture in bra, now came up another screenshot of her reply to a fan and garnering retweets in twitter. People are finding several ways to kill time in this lockdown situation and this one particular Instagram follower decided to ask popular actresses for their semi nude pictures.

Young actress named as Aanchal Aggarwal who is known for appearing in popular hindi television series “Ek Bhram…Sarvagun Sampanna” as Sonali Mittal, found a new way to spend her quarantine time it seems. The actress who is pretty much active in social media platforms, replied to a random online guy who asked her to send a topless picture of herself.

People in social media platforms such as Instagram, Twitter and Facebook often thinks that the things they are sharing in a private inbox of someone else is going to stay private forever. But they must realize that it would become public sooner than they think and would spread faster than they assume. Aanchal who enjoys more than 22,000 followers and 19,000 followers in Twitter and Instagram respectively, received message from a guy who asks the actress to send her picture in bra.

The actress who decided to reply to him, captured the screenshot of her reply and posted it in her social media accounts which are still doing rounds. For asking her topless picture, Aanchal replied by cropping the top of one of her picture. She who replied to him with a “Sure” sent her cropped picture.

Check out the screenshot she posted below :

Adding the picture, she wrote “Weird morning fantasies”. Check out her post below :

This post of the actress gaining wide attention from her followers. “If there is a 30 min difference between the ‘sure’ and the image, the guy will die a thousand deaths in the meantime.” wrote one of her follower whereas another one wrote “Hey there is a little bit of top left.”

If there is a 30 min difference between the 'sure' and the image, the guy will die a thousand deaths in the meantime.

Next time you do this, after the first 'yeah sure' message, please wait for some time before sending the photo.

Earlier, the actress mocked another user who asked for her picture in bra. Aanchal replied to him with a picture of her inner wear along with a passport size photo placed on it, in a way of trolling him.

This post went extremely viral which made the actress to do it one more time to entertain her followers. Comment your views on the way she is dealing such kind followers !!

Previous articleChief Minister’s Reply To A Citizen In Emergency !!
Next articleFor Publishing News About Her With Obscene Caption, VJ Maheshwari Lashed Out !!