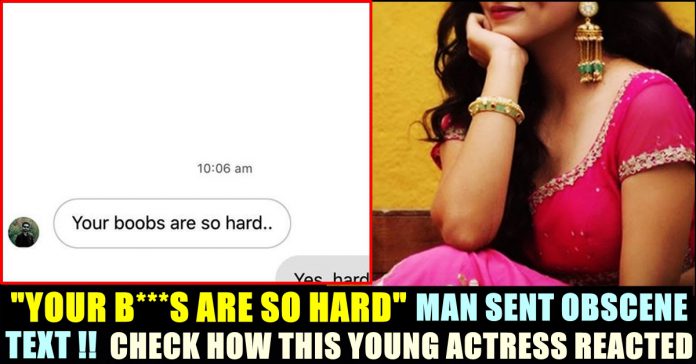 Actress Aanchal Aggarwal who became familiar among online users by giving savage replies to those who are sending her abusive texts, once again came up with a screenshot to entertain her followers. Since the lockdown implementation, while other celebrities are finding various ways to kill time, Aanchal Aggarwal found it interesting to check her Instagram dm’s it seems.

People in social media platforms such as Instagram, Twitter and Facebook often thinks that the things they are sharing in a private inbox of someone else is going to stay private forever. But they must realize that it would become public sooner than they think and would spread faster than they assume. Aanchal who enjoys more than 23,000 followers and 20,000 followers in Twitter and Instagram respectively, constantly receiving messages from random online users who are demanding her to involve in obscene activities with them.

I am doing a throwback okay!

Aanchal Aggarwal is known for appearing in popular hindi television series “Ek Bhram…Sarvagun Sampanna” as Sonali Mittal. She became familiar among online users after exposing the culprits by posting screenshots. Now, one of a user named as “Rajveerpandey” entered her Instagram inbox without invite and wrote “Your boobs are so hard”

Unlike other celebrities who would ignore such messages, Aanchal, replied to him by writing “Yes, hard to get”. She who didn’t stop there, captured the screenshot and posted it in her Instagram and Twitter by writing “While insulting others, everyone feel awesome” in Hindi.

Earlier, The actress who is pretty much active in social media platforms, replied to a random online guy who asked her to send a picture of herself in brassiere. Aanchal replied to him with a picture of her inner wear along with a passport size photo placed on it, in a way of trolling him. She uploaded the post with a caption saying “Never disappoint fans”

To another user who asked for her topless picture, Aanchal replied by literally cropping the top of one of her picture. She replied to him with a “Sure” to troll him.

During mid April, a user asked her to show her down area. The actress, in a way of mocking him, posted a screenshot of Australia’s map location which is a “down area” of India, in one way.

Well, This is one way to handle those scoundrels, ain’t it ?? Comment your views on these replies made by Aanchal !