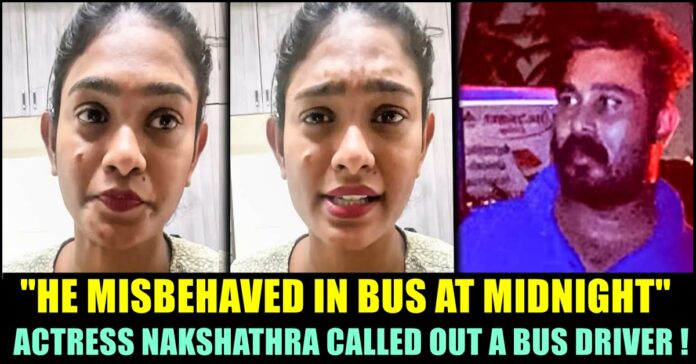 Plight of women who are trying to travel alone in this place that is filled with predators is a state of worry for a very long time. Days after a Chennai based young woman complained against the sexual harassment she went through in Instagram, now, Television actress Nakshathra raised a request to the chief ministers of Tamil nadu and Kerala to take severe action against a bus driver who misbehaved with her sister while she was traveling from Chennai to Aluva.

Nakshathra is known for appearing in serials such as “Valli Thirumanam”, “Yaaradi Nee Mohini” etc. Most lately, the actress came up with a story in her official Instagram handle, complaining against a bus service named Green line travels. Nakshathra said that her sister booked the service through “Red Bus” app and traveled from Chennai to Aluva, their hometown.

Around Midnight, the second driver of the bus reportedly tried touching the girl inappropriately and when complained, he said that he was just trying o operate the bus and touched her by mistake. Realizing about the wrong intention of the driver, Nakshathra’s sister alerted others and the driver found guilty as other passengers kept similar allegation against him.

“Another sexual harassment for my sister in Red Bus (Green line travels Chennai to Aluva). Second driver was misbehave while sleeping in midnight. I request Tamil nadu or Kerala government has to take severe action against this issue. Save our women” Nakshathra said through her post and tagged the chief ministers of Kerala, Tamil nadu and the Chennai Police. 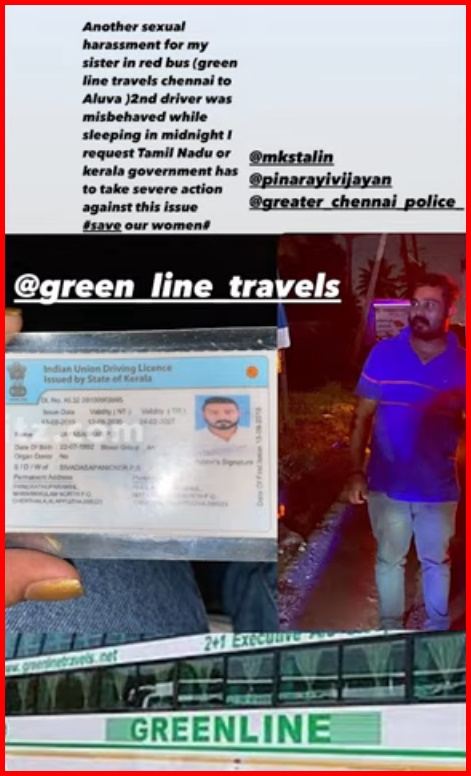 Days ago, a shocking Instagram post from a girl named Shruthi Prakash about the trauma she faced while travelling from Bangalore to Chennai through Red Bus app gained the attention of public. The post shared by Shruthi shows how “victim blaming” comes hand in hand with sexual harassment in the society and the 26 year old sought help from public to amplify her post.

Shruthi was travelling from Bengaluru to Chennai in a bus operated by VHB travels on 7th of July. She bought the ticket to travel from the online platform Red Bus. Shruthi, through her post said that a helper of the bus groped her during 3 am inside the bus while she was sleeping. “When I woke up, I saw a man lying down, below my lower berth. When I asked him to what he was doing there, he responded saying ‘his hands were with him’ even though I didn’t mention it” said Shruthi, according to The News Minute.

“I immediately filed a complaint at the redBus app at around 4 am and by 4.20 am, the bus was stopped. I came to know that the man was a bus staffer” Shruthi further said. It has been reported that the Driver restarted the bus after an hour of scolding the miscreant. Though there was police intervention, Shruthi and her family members didn’t file a complaint after the victim had to hear the unnecessary advises from the driver and others including “your name will get spoilt”. Read Full Details : CHENNAI SHOCKER : Girl Harassed During Her Night Travel From Bangalore To Chennai !!