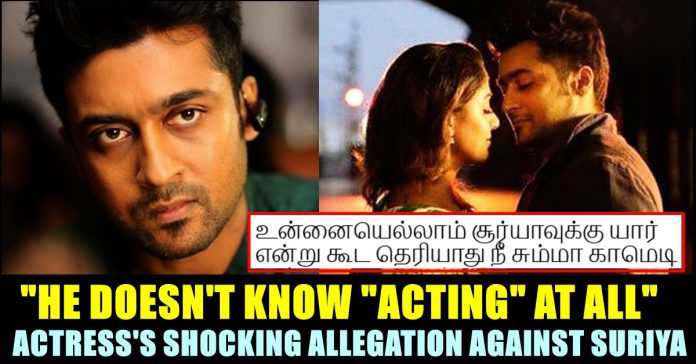 Meera Mithun who has been constantly accusing Kollywood’s high profile celebrities, made an ill statements about actor Suriya’s acting skills, alleging that she witnessed it during the shooting of “Thaana Searntha Koottam” in which she played a minor role. She accused the makers of it for removing most of her scenes and stated that Suriya is one of the main reason for it.

Days before, the former Bigg Boss contestant said that “Kollywood Mafia” prevented her from growing in Tamil film industry as a heroine. She said that “nepotism” exists in Kollywood too. “Kamal Haasan and family, Sivakumar and Family, S.A Chandrasekar and one more family are the four groups that controls the Kollywood” she said in a video.

Earlier, Meera mithun accused actress Trisha for grabbing her opportunities and said that she survives in Kollywood due to her elite caste. Now, in a recent video, the actress, while sharing about her experience on acting in Suriya’s “Thaana Searntha Koottam”, said that Suriya felt insecure about Meera Mitun.

“Suriya would have got very insecured for sure because I can say that he doesn’t even know the spelling of “acting”. I had finished my portions in single take but that is the day I realized that he has got no acting skills at all. He would take at least 10,20 shots for one simple scene and he is struggling a lot to act.” she said.

“In a scene Kalayarasan will die in the film. I cried for that scene without glycerin and the whole public clapped for my performance. He (Suriya) who took a lot of time to get into the mood, should have felt insecure on seeing my performance. He made sure that none of my portions were there. If my role was not that much important, why would Gnanavel Raja and Vignesh Shivan invited me for the success meet.”

She also said that Vignesh Shivan is the only person helped her scenes to take place in the movie. Watch the video below :

Meera Mitun who is known for her controversial allegations against high profile individuals in film industry, has been constantly posting tweets against many celebrities including Kamal Haasan alleging that he is involved in “Nepotism”.

So far she accused Director Cheran for physically assaulting her, Ulaganayagan Kamal haasan for nepotism, Superstar Rajinikanth for promoting himself during COVID 19 pandemic, Trisha, Aishwarya and Nayanthara for copying her fashion style.

Check out some of the reactions for her statement against Suriya :

@meera_mitun if have guts.. Reply me.. actress..first of all u dont have any rights to talk abt Surya Sir , vijay Sir . They have reached this level of peak in kollywood because of their talent and hardwork. Go nd check awards that received by surya Or look out for surya movies