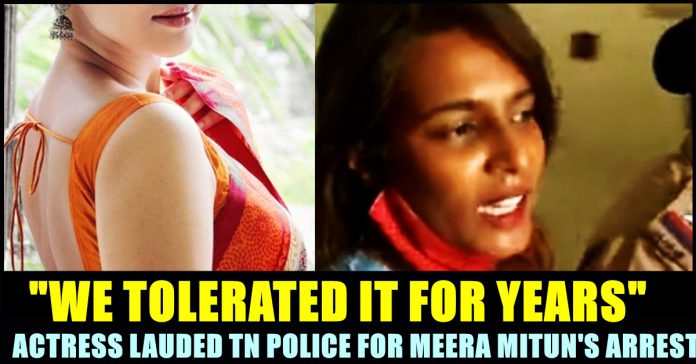 Sanam Shetty who rose to fame among Tamil Tv audience, lauded Tamil nadu police for arresting Meera Mitun who made hateful speech against people who belong to Scheduled Caste. Sanam said that the hateful speeches she tolerated for past few others, along with others, came to and end and said that it is a timely action from the Cyber crime branch and Tamil nadu police.

Chennai Police of Cyber crime branch arrested Meera Mitun in Kerala on Sunday. She was brought to Chennai and the investigations are on regarding the derogatory comments she made against a particular community in a public medium. The actress failed to appear for the investigation and refused to give a valid explanation for not responding to the summon of the Cyber crime police.

She also released a video challenging Tamil nadu police saying that they can only arrest her in their dreams. Based on the IP address, she was found to be in Kerala and the arrest was made with the actress creating a furore, releasing a dramatic video. Meera Mitun is expected to be lodged in Chennai after the inquiries.

After the Cyber Crime Wing Police has summoned model and actor Meera Mitun for an enquiry, she released a video challenging the Police department of Tamil nadu. She who compared herself with Gandhiji and Nehru, said that Police are trying 5 long years to arrest to arrest her but failed. “I won’t face the situation of getting arrested by the Police but if you do, do it as you wish. Even Gandhi ji and Nehru had went to jail” says Meera Mitun in the recent video she released.

On Sunday, Central crime branch police booked Meera Mitun under SC/ST prevention of atrocities act for using casteist slur in one of her recent videos. The First information report was filed on a complaint made by Vanni Arasu, Viduthalai Siruthai Katchi. The news grabbed headlines with many slamming the former Bigg Boss participant who also appeared in few Kollywood films.

It all started when Meera Mitun made distasteful comments against singer Dhee and her caste in one of her recent videos. She said that the filmmakers who belong to scheduled caste in Tamil film industry needs to be removed and alleged that they are copying her face. She made the comment while replying to a comment in social media which said that she looks like Dhee of “Enjoy Enjaami” fame.

In the video, a guy who accompanies Meera Mitun, could be seen highlighting a comment which says that she looks like singer Dhee. “Dhee doesn’t look like me. I told you already that the people of Scheduled caste would involve in activities such as stealing face. I am not talking bad about scheduled caste but I am forced to talk bad about those people because they are involving in doing bad activities” she said in the video.

“That’s why they are facing so many problems, no one is causing trouble for them for the sake of it. Scheduled caste directors and people are involving in all the bad activities. I think it is time to chuck out all these schedule caste people from the industry. They are very cheap. Why are you using my face ?” she says in the video and goes on to utter abusive language.

Proud of @tnpoliceoffl and Cyber Crime Branch for taking timely action today.
Its high time that all hateful speeches that we tolerated for past few years ended.#MeeraMitunArrest

Social Media User Questioned Ileana About Her Virginity !! Her Reply Was Just Expected !!

Celebrities conducting chat session to interact with their fans became common nowadays and almost every cinema celebrity who owns an social media account are...