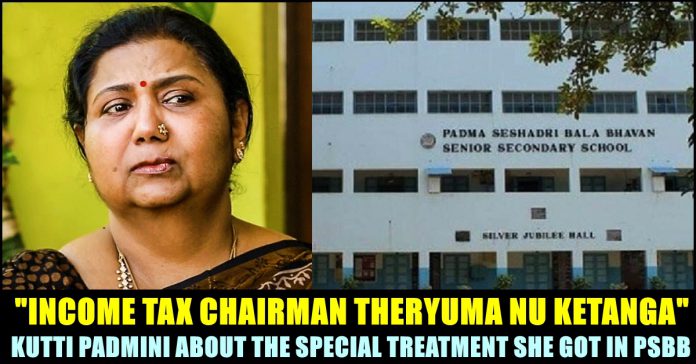 “Though I acted in many serials, dramas and films, I never liked requesting obligations from others. When I was waiting in a queue to join my daughter in the PSBB school, they invited me to their room and asked me that I wasn’t supposed to stand in a queue. They said that I went to the inauguration of the school and ensured my daughter’s admission in the school” Kutti Padmini said in the video.

“After one month of admission, I was informed that Madam has invited me. I felt bad thinking what my mischievous daughter had done to make them (school management) call me. When I visited her in the room, She talked about the advertisements I was doing for the income tax department. She said that my performance in the advertisements were good and asked me whether I would get a chance to meet the chairman of Income tax department” Kutii Padmini said in the video.

“I said that know him very well that he would approve the contents every week. He also happens to approve the story every week, I said to her. She said that she has a small job to do with the income tax chairman and he was not providing an appointment. When I asked her what’s it about, she said that they bought a property in Kodaikkanal with a different account which seems legally wrong. Income tax imposed huge amount as a tax on their property it seems. They asked me to talk to the chairman of income tax and sort it out. At that moment I realized that the special treatment I received was not due to the affection but to get their issue with the Income tax department sorted” Kutti Padmini said in the video.

It all started after a number of students raised voice against the school management for the bad environment they created for the female students of it. A teacher named Rajagopalan got arrested. Kutti Padmini also updated tweet in her official twitter account, writing “PSBB you must enquire Vasanthi from Nugambakkam many parents including me have gone through mental harassment”