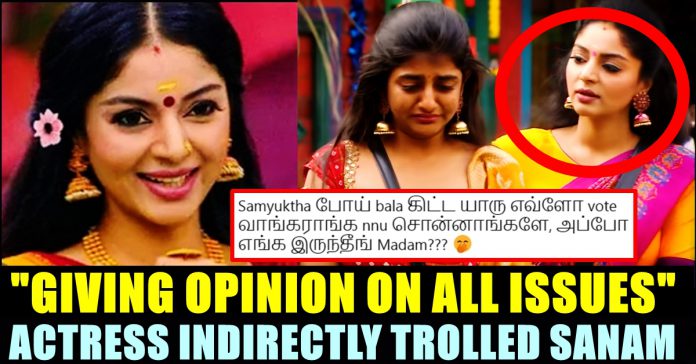 Veteran actress Sri priya who is known for pairing up with Superstar Rajinikanth and Ulaganayagan Kamal Haasan during her prime time, indirectly trolled Bigg Boss contestant Sanam shetty for grabbing attention. She said that someone is trying hard to grab screen space and added that the contestant is interfering on all possible issues.

Sanam shetty’s eviction from the Bigg Boss show came in as a shock to the fans. Along with thousands of Bigg Boss followers, former Bigg Boss contestants also started questioning the authenticity of the voting system. Actress Kasthuri who participated in the third season of the show, posted a tweet condemning the channel for evicting Sanam shetty on the 63rd day.

While getting evicted Sanam said that she is respecting the decision of public. Now, after getting an opportunity to re-enter the house again, she is continuing her bond with her co-contestants. However, on seeing her activities on the Thursday episode, actress Sri priya, one of the ardent celebrity followers of the show, uploaded a tweet taking sly dig at her.

“Jus Watched yesterday’s BB… some one from the guests is trying hard to grab screen space as much as possible by interfering and giving opinion on all possible issues and matters though the bb instructs not to interfere or give any suggestion. any guess?” she said in her tweet and it garnered 1k likes as of now.

Jus Watched yesterday’s BB… some one from the guests is trying hard to grab screen space as much as possible by interfering and giving opinion on all possible issues and matters though the bb instructs not to interfere or give any suggestion.any guess?

On seeing this tweet of Sri priya, a follower asked why she didn’t raise voice against Samyuktha who opened about voting stats to Bala whereas many others said that it is Sanam shetty.

Nenjukulle Kudiyirukkum Enga #Sanam Verithanam. She is on fire 🔥 she is just being presence at people’s hardship and perfectly doing nose cut to #Vesham n #Dubakooru at right time and dialogues #Mass #Sanam

It's Sanam – Not only yesterday ,, from the beginning she interferes in all possible issues /matters to grab attention/screen space !

Mam you are biased everytime. Sanyutha is revealing voting in the last week is so stupid. Even if sanam is trying to grab screen space, we can accept but sharing the voting, each & every thing happened outside she us revealing. Does that sound good?

Nothing new… She was always the same🤦‍♂️

Is it Samyuktha? As she revealed voting difference details😂
Screen space can't be grabbed in reality shows, Sanam rules it!

That useless Sanam. So irritating, it’s really disgusting.. this doesn’t feel like finale week at al..

Atleast she is entertaining some of the audience . You are also trying to get 2 minutes attention with this tweet.