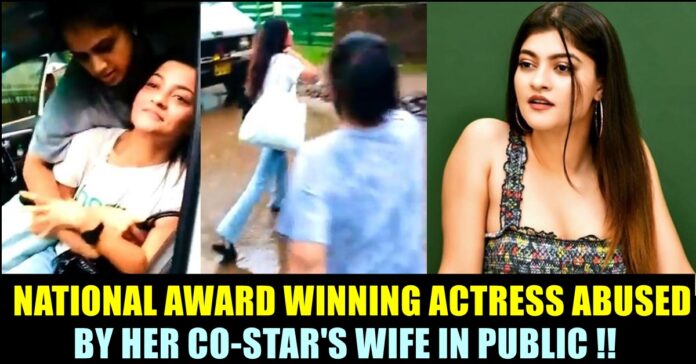 Actress Got Thrashed In Public For Stealing Another Woman’s Husband ??

Actress Prakruthi Misha who is known for winning national award, got assaulted by the wife of her co-star Babushan Mohanty is going viral in social media platforms. In the video, Trupti, the wife of Babushaan, comes behind Prakruti, who was seated in the car. Prakruti asked for help people, who filed the incident.

Prakruti and Babushaan were seen on screen together in their most recent Odia film, Premam. Babushaan’s wife Trupti alleged that Prakruti and her husband were having an affair.

Prakruthi’s mother Krishna Priya Mishra reported the incident to Bhubaneshwar’s Kharavela Nagar Police station. According to the complaint letter, “A few people stopped the car in which her daughter was travelling for work and assaulted her physically and mentally” Prateek Singh, A Deputy commissioner of Police in Bhubaneshwar, said.

Whatever the cause, the victim is being beaten by a lady while screaming for aid. These unshameful bystanders are happily recording videos.#PrakrutiMishraBeatenByBabusanWife #PrakrutiMishra#Babusan pic.twitter.com/pAAOhPu13f

On July 24th July, Prakruthi shared a 4 : 18 minute long video on Instagram making fun of the actor’s family and said that they should chain him up if they feel insecure. Prakruthi attempted to summarize the shocking incident of her assault by Babushaan’s wife in the video.

“They harassed me in the best way possible. It shows their upbringing and their family values. You can hear me shouting for help in the video, but, instead of helping me, people chose to take videos” the actress said.

“Numerous accusations have been made against me. Why would anyone break anybody’s house if it is already broken ? Put a chain around your man’s neck and keep him home if you don’t want to let him go to work. What is the outcome of torturing and bringing fake allegations against another woman, when you cannot keep your husband” she further said.

Here’s how some of the online users reacted to the incident :

It is a shameless incident that both Prakriti Mishra and Babushan Mahanty are actors and they are working on a film right now so how did you know that they are dating.
बड़े तेज हो रहे हो तुम लोग।@prakrutiworld #PrakrutiMishra

If you think she was trying to break her family, then what did this guy do? I mean, chota bacha he kya? Can’t he figure out where is this taking him..didn’t he know he has a family? And his wife still thinks to give him a chance..Again? Idk. I’m not buying it..#PrakrutiMishra https://t.co/UtX8pKaiR0

Most deplorable acts of the day- onlookers’ obsession with shooting and selfies.

While first guy in attached pic shamelessly posed for a selfie, the second guys desperation in hunting for right app to shoot… is disturbing.#babushaan #PrakrutiMishra #TruptiSatpathy pic.twitter.com/BqRoEme3Pb

People are blaming parenting, and calling #Trupti brave, respectful, educated who has given her husband many chances but the truth is she beat up another woman in the middle of the road matter what.#Babushan just fled. Lel. I am not sure what relationship is she fighting for.

#PrakrutiMishra deserves a public apology from the parents of #babushan and #TruptiSatpathy.
A girl was abused, harassed, beaten on the road and the shameless public of #Bhubaneswar were making videos to humiliate the victim.@prakrutiworld be brave and stay strong.

Those who r supporting #PrakrutiMishra & commenting that she was abused,Pls guys stop it becoz #babusanmohanty parents,wife,relatives hv admitted how #PrakrutiMishra has misguided him. The sufferings of a wife having a kid is much more than #PrakrutiMishra.

Previous articleDhanush’s Fitting Reply To Those Who Trolled Him For His Looks!!
Next articleKabaddi Player Died During His Ride!! Heart Breaking Video