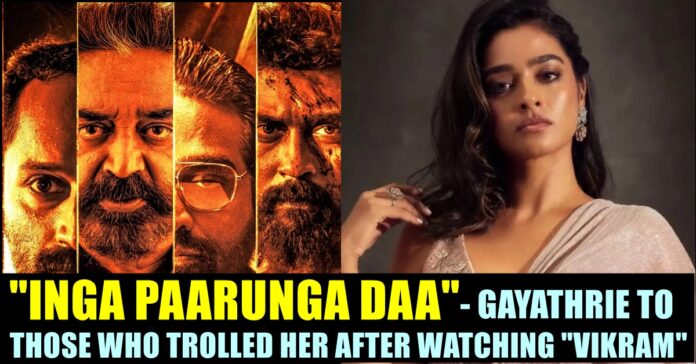 Actress Gayathrie Responded To Those Who Trolled Her After Watching “Vikram” !!

Actress Gayathrie who played the role of Fahadh’s love interest in the blockbuster “Vikram” movie, came up with a post in her Instagram handle responding to those who trolled her after watching the film. In the film, the actress will end up getting killed by Vijay Sethupathi and many fans seemingly asked where is her head. Now, uploading the BTS pictures of the film, Gayathrie gave an answer to them.

Gayathrie played the ole of Gayathri Amar in the film “Vikram”, a girl who gets married to her lover without knowing what is he doing for a living. To take revenge on him, antagonist group headed by Santhanam, played by Vijay Sethupathi would kill her in a car by chopping her head. When Amar comes to save, he only manages to see a body without head.

After watching the film, many seemingly asked the actress where is her head in a humorous way. Responding to them, Gayathrie came up with a post in her official Instagram handle, revealing about a trivia about death scenes in film industry. The post surfaced in Gayathrie’s handle on the 100th day of the film’s theatrical run.

“When an actor performs a dying scene in a movie, it is customary to take a shot of them waking up and smiling at the camera. Somewhat like telling the universe that the scene was just acting and that the actor is alive and well” Gayathri said by sharing a series of pictures from the sets of “Vikram”.

“While shooting for my scene in #vikram we forgot to take that shot. Pressed for time, we couldn’t move the lighting set up either. Soooo we got innovative and took these.. 😛 To everybody asking, unga thala enga, Inga paarunga da! 😄” she further added.

“Vikram” which released with much expectations from fans, exceeded them all we must say. The film which released with an ensemble cast, became the most profitable film in the history of Tamil cinema. Sequel of the film is expected to go on floorss soon and the face off between Kamal Haasan as “Vikram” and Suriya as “Rolex” is highly anticipated in it.

Gayathrie, on the work front, was last seen in “Maamanithan” post “Vikram” and will be seen in “Bhageera”, “Idi Muzhukkam”, “Kaayal”, “Titanic” and many other movies.

Kohli Got Criticized By Seniors For His Statement About Dhoni !! Check His Response

On Tuesday, Former Indian captain Virat Kohli came up with a story in his official Instagram handle which talked about what kind of deserve...

“Will This Society Accept Me If I Sing A Hindu Song?” Asked Youth !! Actress Slammed

Actress Kasthuri who has been constantly raising voicing against the political and social happenings through her official twitter account, has slammed a social...