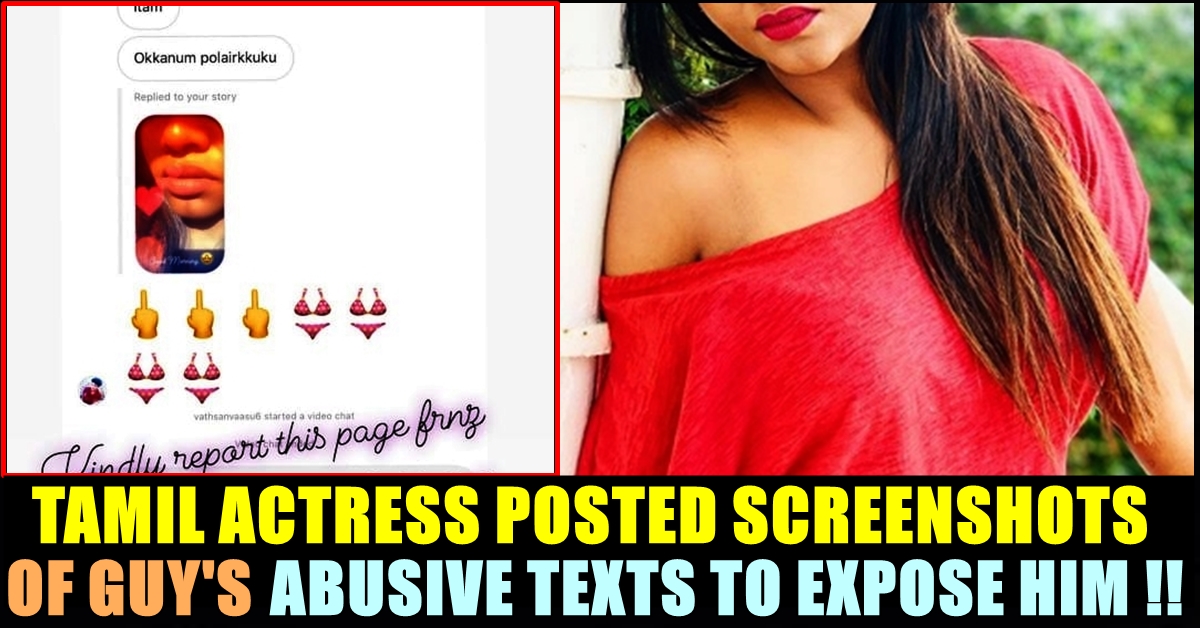 Social media is definitely not a good place for cinema celebrities, especially for female celebrities as they are constantly receiving trolls and abuses constantly. People in social media platforms such as Instagram, Twitter and Facebook often thinks that the things they are sharing in a private inbox of someone else is going to stay private forever. But they must realize that it would become public sooner than they think and would spread faster than they assume.

Actress Shalu Shamu is the latest one to expose the obscene messages she received in her private inbox from an Instagram guy. The actress grabbed the attention of media recently for revealing about a director of Vijay Devarakonda movie who approached her to sleep with him. Now she has exposed this random Instagram using guy for his abusive manner.

I don’t have a look to fall for. But I have a personality you’ll die for. #expecttheunexpected #shootingphoto #differentme #modern #photography #red #addiction #neverbored #loveyourself #hippiestyle #shalushamu #🌹

The actress who is very much active in Instagram has been engage her followers by updating about her daily routines and by uploading her photos from her photoshoots. In a similar way, she posted stories in Instagram today, in a way of letting her followers to know about how good her morning is.

In her first story, Shalu uploaded a selfie of herself with a caption saying saying “Sun Kissing Lips”

Followed by this, Shalu posted another story which is a picture of the actress’s lips alone. She posted it by wishing her followers a “Good Morning”

On seeing these stories, one of a followers of the actress, sent abusive texts to her in a most disgusting way. Shalu Shamu who seems to be receiving such texts from random followers, got extremely frustrated and posted the screenshot of his texts and and asked her followers to report his account.

Followed by this, the actress also posted the screenshot of the user’s photo from hos Instagram account. By adding his picture she wrote “These kind of people thinks if they text me directly the world don’t know their shits. I have been very patience but its time to show. Lets the world see his a** face” she wrote in her story.

She also added another story by writing “Hello, Guys who really doesn’t like to follow me plz do unfollow and mind your work. My posts are my business and it shouldn’t be on your concern table. I can’t reply all the comments & texts and better putting it here is the best way of conveying. I have a limit of patience so don’t test it”

Shalu Shamu who is known for appearing in Varutha Padatha Vaalibar Sangam movie as heroine’s friend, was last seen in Mr.Local in a small role. She is currently enjoying two and half lakh followers in Instagram. Commen t your views on the way Shalu handled the abuser !!