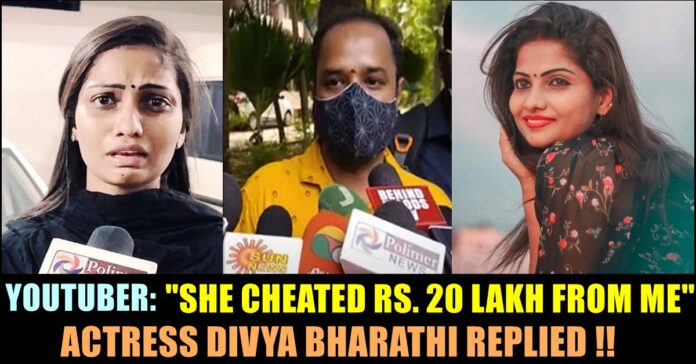 Actress Divya Bharathi Replied To The Cheating Allegations Made Against Her !!

Actress Divya Bharathi who played minor roles in some of the Tamil films and acted in advertisements, came up with a clarification after she was accused of cheating Rs. 30 lakh from a youtuber named Anandaraj. Denying all the allegations, the actress said that she is facing so many struggles as an actor and is depressed due to the case filed against her. She said that there is no way for her other than committing suicide with her child if this harassment continues.

One week ago, a youtuber named Pagalavan aka Anandaraj made a complaint against Divya Bharathi in SP office, alleging that the actress cheated 20 lakh money along wit other valuables such as 10 sovereign of Gold, furniture etc from him . In his complaint, Pagalavan said that he met Divya Bharathi to act for his youtube channel through which he has been making poetry based videos.

“After few days, she maintained a good relationship with me and said that she wishes to marry me. Assuming she must be a good girl, I accepted her proposal and we were in a relationship. She told me that she is raising two children of her elder sister and asked me if we could raise them after marriage. I accepted that too. Then she asked me to give her Rs. 30,000 each month as she is facing some health issues and said that she will take care of herself with the money. She promised to marry me after one year and I started giving her money” Pagalavan said to the media.

“She also maintained a good relationship with my family members and did rituals for my father’s demise as his daughter-in-law. After that, when the time for our marriage neared, she demanded a Swift car, 10 sovereigns of gold and two bikes for her father and mother. I began suspecting her and inquired about her only to know that she is already married and has a child” Pagalavan said who warned youngsters about her.

“I gave Rs. 20 lakh money, 10 sovereign gold, paid advance to her house and bought furniture for her. I have evidence for everything and had filed a complaint against her. Currently, she who is 28 year old, went to Kodaikkanal with a 22 year old guy saying that he is her boyfriend” Pagalavan complained.

Responding to the allegations, Divya Bharathi released a video saying that all the allegations that were made against her was false. She accused Pagalavan of sexually harassing her and went on to break down on air. “He approached me to do videos for his youtube channel and said that he will pay Rs. 20,000 per video. We never fell in a relationship and his allegations are completely false” she said in the video.

“If this continues, I have no option other than committing suicide with my child” she ended her video. Watch it below :

Previous articleMarried Man Spent 550 Sovereigns Of Gold On Girlfriend !! Got Arrested
Next articleSwiggy Boy Blamed Meme Creators For His Break Up !!

During July month of 2020, BJP party appointed actress Namitha as one of the state executive members. She had joined the party in the...