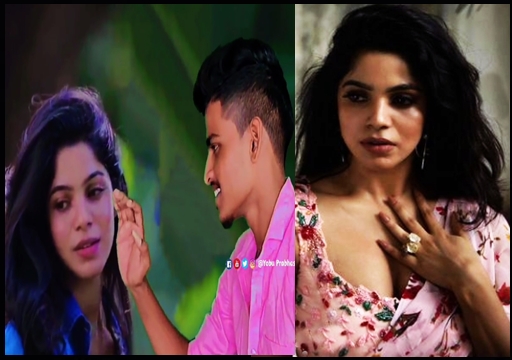 Actress Divya Bharathi of “Bachelor” fame reacted to a hilarious video edit of a fan who replaced himself with G.V Prakash in the recent chartbuster “Adiye”. The video edit showed the fan romancing with the happening actress as G.V Prakash would do for the movie “Bachelor”. Divya laughed out loud on seeing the edit and her tweet is doing rounds in the micro blogging social media site with hilarious reactions.

Divya is also pretty much active in engaging her followers by uploading the pictures of herself from her photoshoots and reel videos. Check out some of her recent posts below :

She is also pretty much active in the micro blogging social media site. Most lately, a fan came up with an amateur video edit in his twitter timeline and it showed himself romancing the actress with “Adiye” playing in the background. Uploading the video, the user named Yobu Prabas tagged G.V Prakash, Divya Bharathi and asked them to watch it.

Divya, unlike other heroines, didn’t lose her nerves or lash out at Yobu for making such edit but laughed out loud at him and shared it in her twitter timeline. Check out her reply below :

Check out some of the reactions Divya’s reply to Yobu received :

On the work front, Divya is expected to be seen in a film with Mugen Rao of Bigg Boss season 3 fame. The film which is titled “Mathil Mel Kaadhal” is going to be a love story ttha is set in and around Chennai. She is also expected play the female lead in the remake of Malayalam blockbuster “Ishq”. Kathir of “Pariyerum Perumaal” fame is going to play protagonist in the film, according to reports.