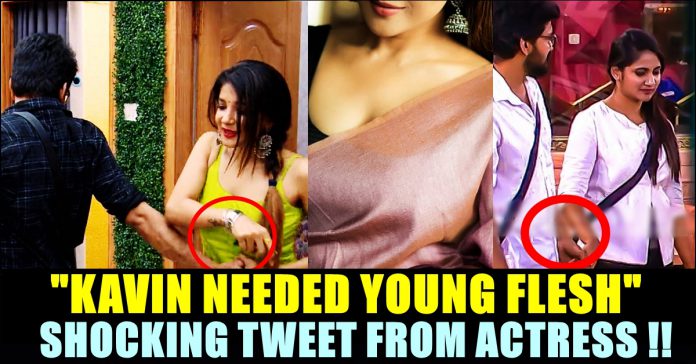 Now in today’s promo, we can see former contestants Kavin and Tharshan entering the house to make their former housemates happy. Now Sakshi, who came out of the house, became active in social media platforms. During her re-entry she hugged Losliya and both of them re-united as friends.

Today, one of a twitter user posted a tweet praising Sakshi for discovering about her co-contestant Kavin too early before any of the viewers. “Sakshi was just ahead of her time like K.Balachander movies. She found out too quickly #Los was a pachondhi, #Kavin was a sly pervert on the lookout for younger flesh, before the audience could find out.@ssakshiagarwalYou were just too intelligent for BB.” the tweet read.

#Sakshi was just ahead of her time like K.Balachander movies. She found out too quickly #Los was a pachondhi, #Kavin was a sly pervert on the lookout for younger flesh, before the audience could find out. @ssakshiagarwal – You were just too intelligent for BB. #BiggBossTamil3

Sakshi who saw this tweet, reacted to it, in a way of completely accepting it. She endorsed the tweet by replying to it with laughing emojis. Check out her tweet below :

Sakshi Agarwal, one of the evicted contestant, still couldn’t come out of the trauma that Bigg Boss show made on her. She has been watching the show since her eviction and even made her re-entry into the house only to make sure to the audience that she doesn’t attached to Kavin anymore with whom she had a strong relationship while being inside the house.

Check out some of the reactions for Sakshi’s reply :

I jst want to say this, pls do not tweet or retweet about THEM. U r giving topics to thm.I know u were true and intelligent but their supporters always keen to find faults in u.

Hope u get it.

Soon Losliya will sing this.. Karma leaves none…

When Kavin walked off the Bigg Boss show with 5 lakhs cheque, a “Kurumpadam” was played by Kamal Haasan in which the summary of the entire activities of Kavin in Bigg Boss house for 90+ days played. In the video we could see the actor being attached with different female housemates in different period. The video even showed some of the unseen clips of the actor being very much attached with Sakshi Agarwal which was not telecasted in daily episodes.

While VJ Anjana was busy brushing off the baseless rumour that caused by Polimer news channel, a fan named Allu Arjun aka "Forever Rocky"...