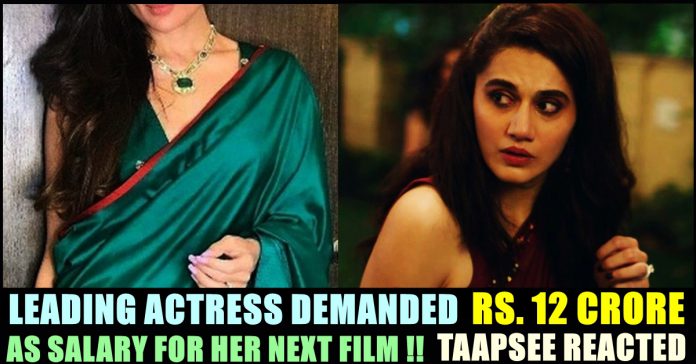 Leading Bollywood actress Kareena kapoor reportedly demanded Rs. 12 crore to play the role of Sita in an upcoming film. Though the news was not official, a hashtag saying “Boycott Kareena Kapoor” trended in the micro blogging social media site with netizens spewing hatred at the actress for demanding such a hefty amount to act in the adaptation of Ramayana. Several trolls attacked the actress and dragged her religion into the debate. In the incident that happened in June month, many said that Kareena, being a Muslim, shouldn’t play the role of Sita.

Now, reacting to the news, Pan Indian actress Taapsee Pannu defended her colleague and called out people who criticized her. The “Aadukalam” actress said that the narrative would have been completely changed if such hike in salary was made by a male actor. Taapsee, in a recent interview said that Kareena Kapoor was in her right to demand a large salary, especially since she is one of the biggest female superstars in country India.

The actress also stated the the criticism on her fee is a sign of ingrained sexism. Taapsee also believed that if a man demanded such hike, it would have been seen as his success. She further expressed her belief on only women being called as “too difficult” and “demanding” when she asks for a hike.

“If it would have been a man in that position, who would have asked for a particular amount, it would have been looked upon like, ‘his market has improved’. Like that guy has really achieved big success in life. But because a woman is asking for it, she’s called ‘difficult’, ‘too demanding’. It’s always like that.” Taapsee said in the interaction and questioned why Taapsee shouldn’t demand such amount, being one of the superstars of our country.

“If she demands a certain salary for the time, it’s her job. Do you really think, like all the other mythological characters that are played by men, do you think they do it for free? I don’t think so” Taapsee said in her statement.