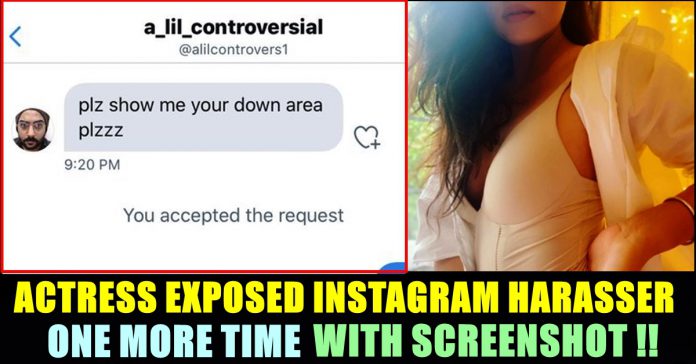 Actress Aanchal Agarwal found a right way to spend her quarantine period it seems. The actress who earlier exposed random Instagram users who asked her to send her pictures with brassiere and without brassiere, now came up with a new screenshot to expose a guy who asked her to show her “Down area”

For a change, this time Aanchal exposed the guy’s identity, unlike previous exposals. “Plz show me your down area plzzzz” asked the guy to the actress through his message. The actress, in a way of mocking him, posted a screenshot of Australia’s location which is a “down area” of India, in one way.

Here’s the screenshot she shared :

Couple of days before, to an Instagram user who asked Aanchal to send her topless picture, the actress cropped one of her picture and sent it to him. In a way of trolling him, Aanchal wrote “Weird morning fantasies” as her post’s caption :

Earlier, the actress mocked another user who asked for her picture in bra. Aanchal replied to him with a picture of her inner wear along with a passport size photo placed on it, in a way of trolling him. “Never Disappoint Fans” read the caption of her post.

These kind of responses of Aanchal Agarwal gained her a separate set of fans. The actress who is pretty much active in social media platforms, is known for appearing in popular hindi television series “Ek Bhram…Sarvagun Sampanna” as Sonali Mittal. Aanchal is enjoying more than 22,000 followers and 19,000 followers in Twitter and Instagram respectively.

Recently one of a user asked whether the actress is making these up to gain popularity in social media. Aanchal wrote “As soon as the lockdown ends get your eyes checked because you clearly didn’t see a handle there.”

As soon as the lockdown ends get your eyes checked because you clearly didn’t see a handle there.

Despite exposing these kind of texts, Aanchal is still getting such texts from boys which evidently shows their level of stupidity. What is going to stop those guys from sending obscene kind of texts to random girls ?? Comment your views below !!