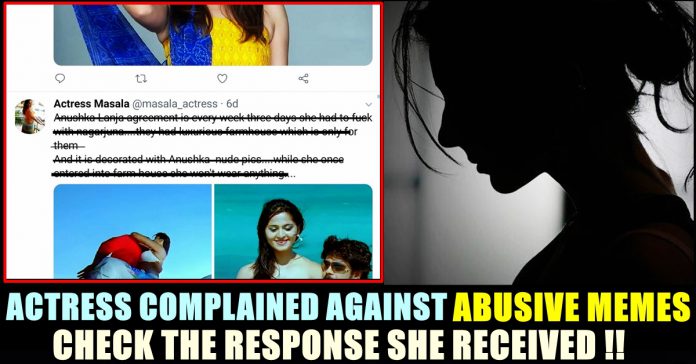 The number of abusive texts and posts that are being created against female celebrities in social media platforms are increasing in vast number. Knowing that there is no severe laws created yet to put them behind the bars for creating such post in social media, people, mostly men who owns a smartphone are uploading abusive posts without giving a thought about the consequences.

We have seen many female celebrities reporting about cyber bullying to the authorities from their social media accounts. The recent one to join the list is popular anchor and south Indian actress Anasuya Bharadwaj. Initially she complained to Twitter support to take appropriate action against the twitter handle “Masala Actress” for posting abusive contents about herself and other actors such as Anushka and Nagarjuna.

Anasuya who happened to witness those filthy posts immediately raised complaint to Twitter support only to get a reply saying that it doesn’t violate the rules. Check out the screenshot she posted below :

Sharing the screenshots of the complaints she posted, Anasuya wrote “Dear Twitter Support.. I urge you to reassess “your rules” .. if this is not violating then what else does.. I won’t shy away to blame you guys as major influence by not contemplating the cyber abuse.. Cyber Crime, Sir I request you to help tag the right authorities 🙏”

Dear @TwitterSupport .. I urge you to reassess "your rules" .. if this is not violating then what else does.. I won't shy away to blame you guys as major influence by not contemplating the cyber abuse.. @cybercrimecyb1 Sir I request you to help tag the right authorities 🙏 pic.twitter.com/G4I3KRwFQ9

As she requested Cyber crime to probe into the matter, the twitter handle of Cyber Crimes Hyderabad replied with a positive response.

Celebrities from all over the world are subject to online trolling in a daily basis. In this digital era we could hardly witness anyone who does not have a Facebook or Instagram account. As smart phones and Internet data became cheap in India since the entry of Jio, the number of people using social media accounts in the country reached sky high.

Recently, a report has surfaced saying that the abusers who are bullying actresses in social media will be punished severely under the law. Those who are targeting actresses in social media in order to hurt them will be identified as a serious offender, according to reports. Police officers got the access to arrest them immediately and to book cases against them. Popular celebrities such as Chinmayi, Samantha expressed their support regarding the news.

Now to report every meme maker that says lanja and ninja and she rejected a film because of no liplock. If a few of these men land in jail, they’ll learn a lesson 🙂

Samantha’s Emotional Note About Her Health!!

On Saturday, actress Samantha came up with an emotional note updating about the health condition she has been going through. The "Super Deluxe" actress...

Actress Kasthuri who questioned about the USA visit of Superstar Rajinikanth during the ban on travel, uploaded a tweet on Tuesday, saying that she...