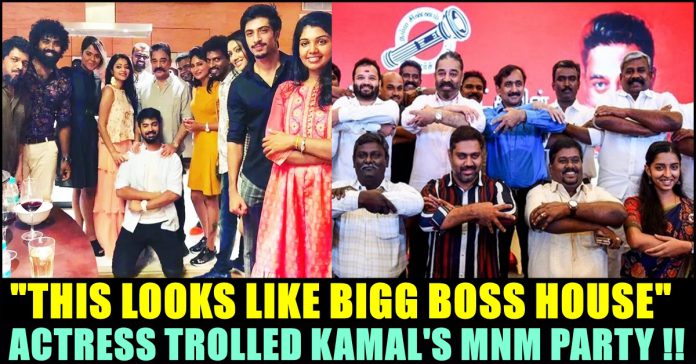 Trolls and criticisms targeting party MNM has been surfacing in Internet after Dr. Santhosh babu IAS and Padma Priya announced that they are quitting from the party. Hashtag “Makkal Needhi Maiam” is trending in Twitter with various kind of reactions pouring from all the directions. Actress Kasthuri who is known among twitter users for her opinions on Tamil nadu politics, compared the Kamal Haasan led party with Bigg Boss house. In her tweet, she wondered whom will be the next one to go from the party. Both of them cited personal reasons for their exit from the party.

After vice president Mahendran and many other administrators of Makkal Needhi Maiam party, two more prominent officials announced that they are leaving the party. Padmapriya who contested in Maduravoyal constituency and Dr. Santhosh Babu IAS, General Secretary of Makkal Needhi Maiam who contested in Velacherry constituency posted tweets, announcing about their resignation from the party.

Mixed reactions with people supporting the veteran actor and trolling him based on the continuous resignations of his party members are trending in social media platforms. Check out of the reactions under “Makkal Needhi Maiam” hashtag below :

#MakkalNeedhiMaiam doesn't have to worry about any exodus..

Their focus is next Assembly elections, which is 5 years away..

People who accept the leadership of #KamalHaasan will continue to be in the party..

Hope they focus more on rural penetration and build the party..

In #MNM, only one person matters, @ikamalhaasan. Everyone else can leave and it won't make a difference.

Moment when even a tik tok celebrity left your party 😬#MakkalNeedhiMaiam pic.twitter.com/HhteRA7iVY

If not Seeman's NTK or #KamalHaasan's MNM, the current regime wouldn't have became this active.. Third alternative & their increased vote % pushes the two giant parties to work 💯 for people..

Actress Kasthuri who partipated in Kamal Haasan’s Bigg Boss show, uploaded a tweet comparing the latter’s party with a Bigg Boss house in her tweet. “Youtuber Padmapriya who contested Maduravoil and Santosh Babu IAS who ran from Velachery both quit from MNM, the party they had joined just before TN elections. This is starting to look like BiggBoss house. Who will be the next to go?” she said in her tweet.

Youtuber Padmapriya who contested Maduravoil and Santosh Babu IAS who ran from Velachery both quit from MNM, the party they had joined just before TN elections.
This is starting to look like BiggBoss house.Who will be the next to go? #elimination #maiam #kamal

Movie director G Mohan uploaded a tweet requesting Kamal Haasan to quit politics and start concentrating on cinema. “There is no grand shooting floor in Chennai. Please work on building one. History will speak about you if you do that” he said in his tweet.

On 6th of May, Prominent members of Kamal Haasan’s Makkal Needhi Maiam announced that they are resigning from the party. The decision came from the politicians after the party failed to win any of the seats in the Tamil nadu assembly election. Vice President Mahendran, in his press release said that there is no change in the approach of Kamal Haasan in taking the party forward even after the huge loss.

Along with Mahendran, many other party administrators including Ponraj are resigning from the party, it was reported. Muruganandam, Maurya IPS, Thangavel, Umadevi, C K Kumaravel, Sekhar and Suresh iyer are some of the important members who removed themselves from the party. While interacting with the press, Ponraj said that the party needs to be reformed.

Former Chennai Super Kings Player Suresh Raina who went unsold in the IPL 2022 auction, came up with an emotional message in his official...