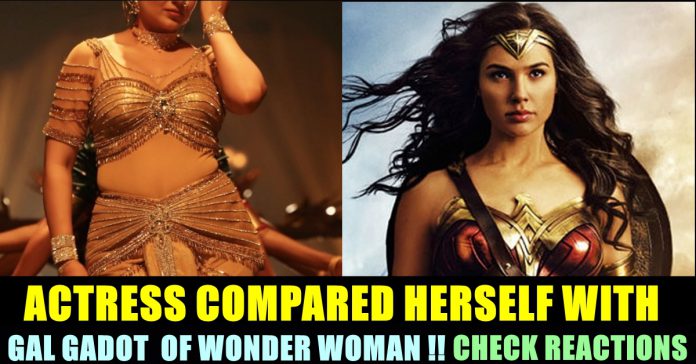 Controversial actress Kangana Ranaut uploaded a couple of tweets comparing herself with legendary actresses such as Meryl Streep and Gal Gadot. The tweet garnered huge reach and became a subject to massive trolls as the actress is known for her controversial political opinions and open statements against popular individuals.

She who shared the pictures from her upcoming projects “Thalaivi” and “Dhaakad”, uploaded the post with a disclaimer saying “Massive transformation alert”. The actress who is known among Tamil audience for her stint in “Dhaam Dhoom” film, claimed that no other actress on this globe has the range she contains.

Kangana said that she can do roles like Meryl Streep for layered character depictions and also can do action and glamour role like Gal Gadot of Wonder Women fame. “Massive transformation alert, The kind of range I display as a performer no other actress on this globe has that right now, I have raw talent like Meryl Streep for layered character depictions but I can also do skilled action and glamour like Gal Gadot” read the tweet of Kangana.

Through her next tweet, Kangana also called anyone to have an open debate with her regarding the topic and promised to give up her arrogance if anyone show an actress with brilliance and range that is on par with her. “I am open for debate if anyone can show me more range and brilliance of craft than me by any other actress on this planet I promise to give up my arrogance, until then I can surely afford the luxury of pride” the next tweet of Kangana who added a number pictures from her future projects read.

I am open for debate if anyone can show me more range and brilliance of craft than me by any other actress on this planet I promise to give up my arrogance, until then I can surely afford the luxury of pride #Thalaivi #Dhaakad pic.twitter.com/0RXB1FcM43

Responding to this tweet, many users of the micro blogging social media site came up with the pictures of other actresses such as Priyanka Chopra, Deepika Padukone to prove her wrong. Many others brutally trolled her for her tweet as well. While replying to a follower, Kangana claimed that her filmography is better than Meryl Streep.

Check out some of the reactions and Kangana’s replies below :

Our films may not be as good as Hollywood films but my filmography as an actor is way better than this list Gangster, Fashion,Queen, Tanu, Datto, Manikarnika and of course this is just the beginning.Thalaivi, Dhaakad n many more, yes praise others but also acknowledge our own 🙏

Pls prove my claims wrong or illogical, will accept my statements as gloating disorder, if you can’t then you too have to accept, in this world of mediocre hyenas who will do anything to look through genuine talent Modesty is not good not at the cost of HONESTY. Snatch your due. https://t.co/MA6hT7Pdxh

I honestly want to know why do we worship white people? Forget their budgets and our age gap, tell me about just acting can she do Thalaivi and Dhaakad? Queen and Tanu? Fashion and Panga? Kaya and Datto? Answer is she can’t, then why not emerge from the deep rooted complex? https://t.co/59ir97DCw5

Meryl Streep after reading this👇🏽 pic.twitter.com/eiC3DxnCot

Why just because she is white you automatically assume we can’t be as good as her, forget their budgets or our age gap, tell me purely about the craft can she do Thalaivi and Dhaakad both? Fashion and Datto both? Panga and Krish both? Tanu and Thalaivi both?

Haha, I like how many are trying to come up with names of women actors who have shown more versatility–like she were genuinely looking to participate in a respectful debate or something.#vidungapa

Previous article“Receipts For Waive Off Will Be Handed Over To Farmers In 15 Days” – TN CM On Agriculture Debts
Next articleDirector Replied To C.S Amudhan’s Criticism On “Master” !!

BIGG BOSS 2 This Week’s Leader Leaked !! After Nithya, This Time Another Controversial Contestant To Lead !!

Kamal Haasan began Saturday’s episode of Bigg Boss Tamil Season two with a statement that sounded like his campaign slogan for the upcoming elections...