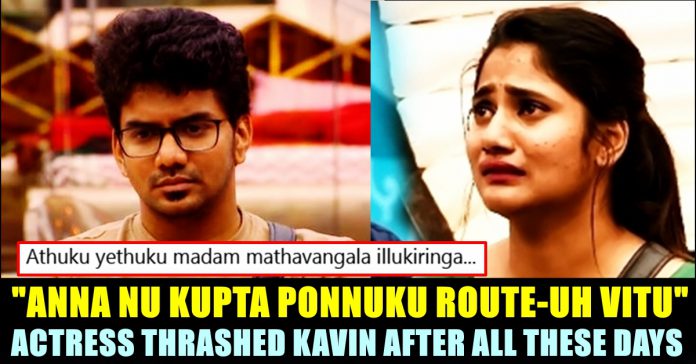 Actress Blamed Kavin For Flirting With Losliya After All These Days !!

The impact made by Bigg Boss Tamil season 3 has no end it seems. The contestants who got participated in the show are getting awards and we can see people either praising or trolling the celebrities who participated in it in their social media posts. This evidently proves that the trauma created by the 100 days reality game show is a never ending one for both the participants and for the viewers.

Actress Kasthuri entered the Bigg Boss house as wild card entrant and got evicted in the very first week she got nominated. She doesn’t made much impact inside the house during her stint and now she became active on Twitter where she is famous. Since her entry, no contestant liked her company, especially Kavin which was evident through their behaviour.

Kavin, Mugen, Losliya, Sandy nominated Kasthuri for nomination which caused her eviction. However, the actress said that she already knew that she would not last more than 2 weeks and packed dress only for 14 days. After coming out of house, she watched the episodes and came to know that Kavin & co talked bad about her behind her back. This reflected in her interviews and in her twitter timeline.

Fans of Kavin always trolled her in her twitter posts and it continued in the comment section of the actress’s birthday wishes to Superstar Rajinikanth. When one of the user said that Kasthuri is only active in Twitter and got trolled by other contestants in bigg boss house, the actress asked him back who stood against her in the show.

To this tweet another user said that Vanitha and Kavin stood against her to which Kasthuri replied by writing “Comedy pannatheenga. Nyaayamnaa ennanu theriyuma.”

As we can see Kasthuri is mentioning Kavin and Losliya who were involved in a sort of relationship inside the Bigg Boss house. This made many fans of Kavin angry who started questioning the actress why she is dragging his name unnecessarily. Check out her replies to them here :

Prove it. I have not talked about kavin or biggboss. But a few losers on twitter seem to have a guilty conscience.

where have i named or shamed anyone? cant help if you feel that way. Your #guiltyconcience pricks is your business.

BS. Where have i even mentioned Kavin. You guys are feeling guilty, why?

What do you think on these replies of the actress ?? Comment your views below !!

Previous articleRaghava Lawrence Rejected Acting In “Thalaivan Irukindraan” !! Here’s Why
Next articleRishabh Pant Broke Up With His Girlfriend To Date This Actress ??

The chairperson of the committee on the new National Education Policy, K Kasturirangan, has cleared the air on the Hindi bias in the draft...

A new video of STR aka Silambarasan working out in gym to reduce his weight has been released by the producer of his next...

Actor Shanthanu and Director Rathnakumar are having a tough time in Twitter since they signed Lokesh Kanagaraj's "Master" for acting and writing respectively. Fans...