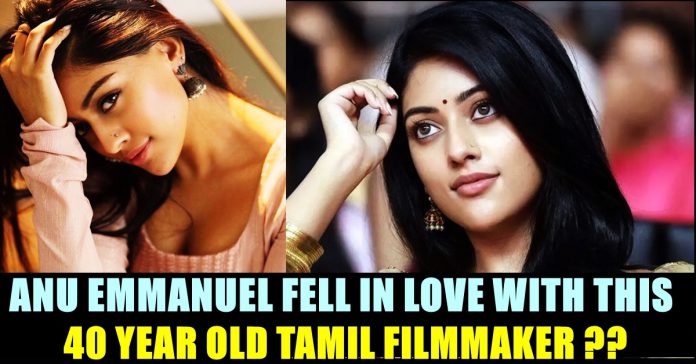 Actress Anu Immanuel who became familiar among Tamil audience after pairing opposite to Sivakarthikeyan in “Namma Veetu Pillai”, debuted in Tamil film industry through Mysskin-Vishal’s “Thupparivalan”. Now, a latest buzz about her personal life is doing rounds in the media portals across South India. The rumour suggests that the actress is currently involved in a romantic relationship with a Tamil filmmaker named Jyothi Krishna.

The 23 year old actress began her career in film industry through a Malayalam film named “Swapna sanchari” and debuted as a heroine through 2016 Malayalam film “Action Hero Biju”. In Telugu, She debuted through a romantic film Majnu and later she appeared in Kittu Unnadu Jagratha, Oxygen, and Agnyaathavaasi. It has been reported that the actress and the filmmaker developed mutual interest during the making of “Oxygen” which was made in the year 2017.

Jyothi Krishna directed Gopi Chand, Raashi Khanna, Anu Immanuel in the film which was produced by his father A.M Rathnam. It is notable that the filmmaker is a brother of popular actor Ravi Krishna who is known among audience for acting in films such as “7 G Rainbow colony”, “Aranya Kandam”, “Sukran” etc.

It has been reported that Jyothi Krishna, during his teen, involved in the pre production process of blockbuster Tamil films such as “Natpukkaga”, “Padayappa”. He debuted as a director in Tamil film industry through “Enakku 20 Unaku 18” which has actors Tarun, Trisha, Shreya in the lead roles. The film’s music was composed by A.R Rahman. Later he directed “Kedi” by having his brother Ravi krishna in the lead role. The film marked the debut of actresses Tamanna and Ileana. Jyothi Krishna also acted as a co-producer for Ajith Kumar starring “Vedhalam” in the year 2015.

Though the duo are yet to respond to these rumours on their personal relationship, the news is spreading like a wild fire among the media portals across South India.