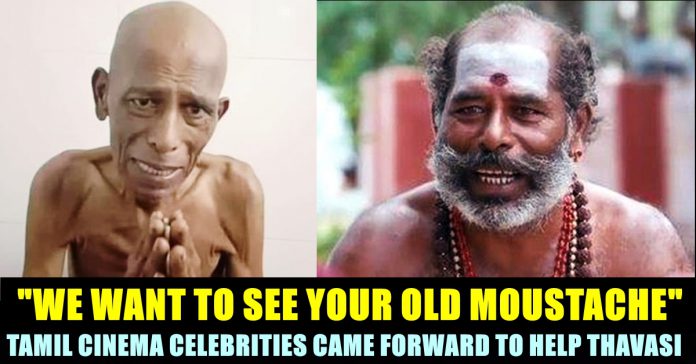 Actor Thavasi who is known for appearing in Sivakarthikeyan’s “Varuthapadatha Valibar Sangam” as a fake astrologer, has been combating cancer and actors of Tamil film industry are stretching their supportive hand to him. It has been reported that actor Vijay Sethupathi donated Rs.1 lakh for Thavasi. Superstar Rajinikanth with whom Thavasi acted in his upcoming “Annaththe”, also provided financial aid to the actor along with Sivakarthikeyan, Soori and Simbu.

Now, a video of popular comedy actor Robo Shankar meeting Thavasi in the hospital which is located in Madurai has been doing rounds in social media platforms. The “Maari” comedian could be seen donating an amount to him for his betterment. Apart from that, he motivated “Thavasi” to make a “come back” and asked him to say it. As every Kollywood fan, Robo also wanted Thavasi to appear in front of camera with his iconic “moustache”.

“Mental health is important” says Robo shankar to Thavasi. “We want to see your old “moustache”. You have to bring back that “Karuppan Kusumban”. Say “I am back” now” Robo makes him say it. “It makes us sad on seeing your picture. I know you will come back as strong as a Lion.” he says.

Thavasi appeared in more than 140 films as a supporting actor. “Rajini Murugan”, “Kanne kalaimaane”, “Varuthapadatha Vaalibar Sangham” are some of the notable recent works of him. Actor Soundararaja of “Jigarthanda” and “Bigil”, met Thavasi in hospital on Tuesday. He said “Thavasi mama has cancer in his food pipe. He seems to have had the tumor for over a year and hadn’t realised it. He first took treatment at a Private hospital in Chennai, but later went to Madurai government hospital”

“Actor- director Saravana Sakthi who came to known about this, had requested Dr. Saravanan to offer him treatment in his film. Thavasi mama was shifted to his hospital and his condition had gotten better. He has lot all his hair due to the cancer treatment though” he added.

After speaking to Thavasi, Soundararajan said that Thavasi came out of critical state. “He is able to speak now and said that he is feeling a bit better in the past few days. Doctors have now inserted an esophageal stent in his food pipe so that he can take food, and are planning to perform an operation later, if necessary” he said who added that Vijay Sethupathi couldn’t make his appearance in the hospital due to his hectic shooting schedule and gave him the amount to help Thavasi. Soundarajan has provided Rs.10,000 on his behalf to Thavasi.

“Dr. Saravanan who is also an MLA has assured that he will take care of the medical assistance that Thavasi is needed” Soundar said. Reports suggested that Rajinikanth had provided an undisclosed amount whereas Vijay Sethupathi and Simbu has given Rs. 1 Lakh each. Sivakarthikeyan has given Rs.25,000 and Soori who has given Rs.25,000, is also providing food for the family members of Thavasi through his hotel in Madurai.

Previous articleSanthana Bharathi Is Trending In Tamil nadu Ahead Of Amit Shah’s Visit !!
Next articleMan Of Warrior Caste Wants Non-Feminist Girl To Marry !!

Before Gifting Loki A Lexus, Kamal Haasan Gifted This To The 13 Assistant Directors!!