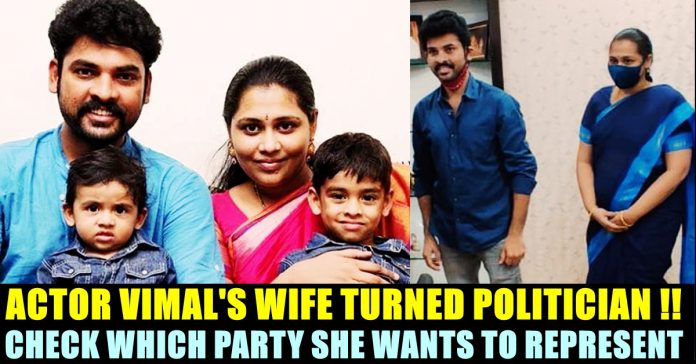 Popular actor Vimal who is known for his blockbuster flicks “Kalavaani”, “Vaagai Sooda Va”, “Kalakalapu”, “Manjappai” has met his fellow actor and politician Udhayanithi Stalin regarding his wife’s political stint. Priyadarshini, wife of the actor has turned politician and has approached DMK party to contest in the upcoming assembly election from the constituency of Manapparai.

He established himself as a successful upcoming actor with Kalavani, after that he has claimed his name with these comedy movies Vaagai Sooda Vaa, Kalakalappu, Kedi Billa Killadi Ranga, Desingu Raja, Manjapai and Mannar Vagaiyara. Now, Vimal and his wife Priyadarshini met DMK’s Youth wing president Udhayanithi Stalin. The duo handed over the application to the son of DMK chief MK Stalin in order to get a ticket from the party to contest in the upcoming elections. Pictures of the incident are doing rounds in the social media platforms with various kind of reactions.

Previous articleWhen Vijay Suggested A PRO To Promote Suriya More !! WATCH
Next articleGirl Begs For Justice After The Murder Of Her Father !!

Sanam Shetty Confronted Balaji Murugadoss For His Statement Against Behindwoods !!

Sanam shetty, one of the co-contestants of Balaji Murugadoss, confronted him for the latest accusation he made against Behindwoods youtube channel. She asked him...