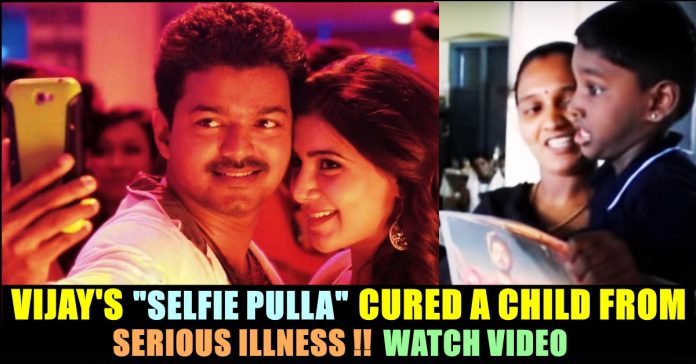 Being one of the very few actors who grabs kids to the theatres, Vijay has now slowly curing a physically abled child without even his knowledge. Let alone Tamilandu, Vijay also has a huge fanbase in the state Kerala. The report ruport in various media houses suggests that a kid who couldn’t speak or walk since his birth is slowly showing progress in his health after listening to Vijay’s “Selfie Pulla” song from “Kaththi” movie.

The kid whose name is Sebastian was shown to many doctors by his parents and they finally decided to admit him in the Panchakarma hospital in idukki. The reports suggests, that the doctors had witnessed a little movement in Sebastian’s body when the ringtone of Vijay’s “Selfie Pulla” played.

After that Doctors decided to show him the movies of Vijay and let him hear the punch dialogues of the actor which resulted in a big change in the physique of the kid. He reportedly started walking and what acts as therapy is no medicine but the glimpses of Tamil star Vijay. He also started talking slowly according to Indiaglitz. In the videos we can see him holding the posted of recently released “Bigil” and a happy mother holding him with joy in her face.

This progress indeed shocked the medical industry and fans of the actor are happlity sharing this news in social media platforms. Check out some of their reactions below :

A child getting cure with hearing #Vijay's dialogue ! Why I'm feeling so happy after hearing this? 😍🔥 Thalaivaaa @actorvijay very few are born with these kind of blessings and you are one among them..! Making proud, Luv u Thalapathy 😘❤pic.twitter.com/Nblf5jNPgw

#Vijay A Child Getting Cure with Hearing Thalapathy VijaY Anna Dialogue! Why I'm Feeling So Happy After Hearing Thizz😍😍
Thalaivaa Very Few Are Born With These kind oF blessings and u r one Among Them.. proud Te be ThalaPathy Fan Lub u Na…💗💗 pic.twitter.com/qNegmpLc7G

Music Therapy is a Form Of Cure as it Triggers the brain processes and functioning that directly affect one's cognitive, emotional and physical functions and abilities.

Can a medicine cure Illness than His Smile!😍
Not definitely!🤓
Charmer ! Thalapathy Vijay!!!!😍 pic.twitter.com/RimnHetFHq

It is indeed happy to see progress in Sebastian’s health ?? Let us pray for him to recover soon from his illness !!

Previous articleIndhuja Proposed By This Young Actress In Public !!
Next articleLegendary Singer SPB Humiliated At The Event Hosted By PM Modi ??

Selvaraghavan Regrets For Lying About His Film’s Budget !!

On Thursday, Director Selvaraghavan came up with a tweet revealing about a fact on how he lied about the budget of his "Aayirathil Oruvan"...

Girl Child Suffers After The Arrest Of Her Parents !! WATCH !!

Due to the protest against the Citizenship Amendment Law, over 70 people got arrested in Uttar Pradesh's Varanasi. They got arrested for protesting after...

Chennai Super Kings captain MS Dhoni walking onto the field after a no-ball was called and then overturned in the 20th over of the...

Fan Included Prithi Ashwin In This Group Picture Of Indian Team !! Here’s How She Reacted !!

Ravichandran Ashwin one of the prominent spinners in Indian team is currently with Team India in their West Indies tour. In the two match...