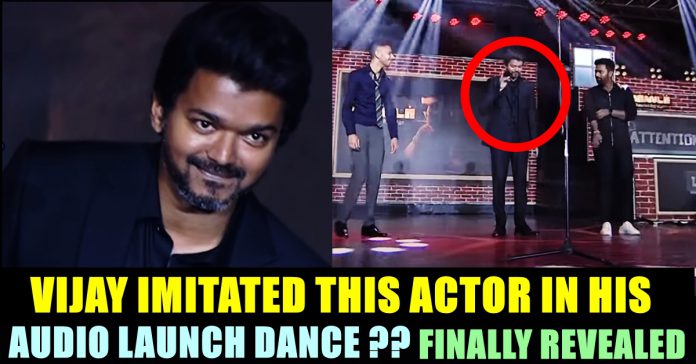 Actor Shanthanu, an ardent fan of actor Vijay will have many more audio launches in future for his films but will never forget the audio launch of “Master” film which took place few days before the implement of lockdown announced by the Indian government. In that audio launch, Shanthanu who shared screen space with actor Vijay in the film, had a chance to shake legs with his idol for a song from “Master”.

We all know that the audio launches of the movies of actor Vijay has got a whole new dimension since the actor started giving speeches addressing the social issues and motivational quotes. He who directly interacts with his fans only during the audio launch, also narrating them a short story in order to make them lead a successful life. His speech during “Bigil” audio launch is still making waves as he gave a powerful speech targeting the current politicians and their atrocities.

He called Shanthanu and Anirudh to the stage and the very few steps they performed reached every nook and corner of Tamilnadu as we could see many youngsters imitating the same steps and posting it in social media platforms such as Tik Tok, Facebook etc. Watch the video below :

Now, after one month, Shanthanu has revealed where Vijay got inspired to perform those steps from his dance video which he uploaded few days before the audio launch. Shanthanu and his wife Kiki uploaded their own version of “Vaathi Coming” which was performed with their dance students in their dance studio.

Sharing this video, Shanthanu wrote “It was a very normal Choreo which I did infact old stepu dhan but I’m happy it synced so well with the song & he did it on stage. And now becuz of him , everyone is doing this step Thank you na” in his post.

It was a very normal Choreo which I did infact old stepu dhan but I’m happy it synced so well with the song & he did it on stage🤩 And now becuz of him , every one is doing this step 🤩🔥
Thank you na🤩💛 https://t.co/HQKnAwUzJv

Fans got surprised on knowing about this fact and expressed their excitement in the comment section. The film which was supposed to release on 9th of April got postponed due to corona crisis and is expected to have a grand release post lockdown.