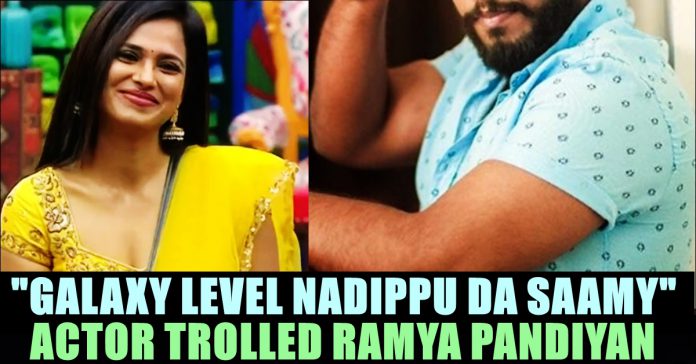 The weekend episode of Bigg Boss season got streamed and Kamal Haasan started the show by paying condolences to Tho. Paramasivam who got passed away recently. The actor who recommended one of his books in an earlier episode to the viewers of the show, made audience to witness him through video conference. Throughout the episode, he talked to contestants and analysed their weekday activities and behaviour towards each other.

On seeing the episode, along with many other fans, actor Shiva Kumar who has been expressing his views about the show, criticized actress Ramya Pandiyan saying that she is displaying “Galaxy level acting”.

Bigg Boss season four is nearing its end and only few contestants are staying inside the house, competing for the title. Ramya Pandiyan, Aari Arjunan, Balaji Murugadoss are the strongest contenders who are expected to clinch the trophy of Bigg Boss after Aarav Nafeez, Riythvikha and Mugen Rao. Fans of the above mentioned contestants are always involved in verbal spat with each other in social media platforms.

Ramya Pandiyan who was highly believed to win the trophy of Bigg Boss season 4, is slowly gaining haters due to her activities in the past few episodes that got telecasted. Ramya Pandiyan rose to fame among Tamil cinema audience through the pictures surfaced in the internet from her terrace photoshoot. She acted in films such as “Joker”, “Aan Devathai” etc.

After participating in the show, Ramya, initially grabbed the hearts of fans by expressing her opinions for the appropriate issues. However, in the past few episodes, the way she was laughing during serious issues irked the followers of the show. She also raising voice, supporting only selective contestants such as Balaji Murugadoss, believed fans.

Similar tweets and reactions are surfacing in the Internet regarding the same.

That's not the point. If Ramya thinks that a certain HM will be evicted, then she shd stick to that name. She can't keep changing her choices according to the person she's speaking to. That's called hypocrisy.#BiggBossTamil4#BiggBossTamil

If she is sensitive about their feelings, I don’t predict nu Gabi madri solliruklame!

#Ramya plan is to go finals with mixtures..so that sureshot she is title winner 🤷‍♀️ simple.pakka plan 👌😏

I hope she gets evicted before Gaby/Shivani..slippershot for arrogance 😎

If she doesnt want to say that you might get evicted, then please say that it's hard to guess rather than saying the person who is not present in the conversation. 🤣🤣

“I Felt Cheap & Used” Mia Khalifa Shared About The Trauma She Went Through !!