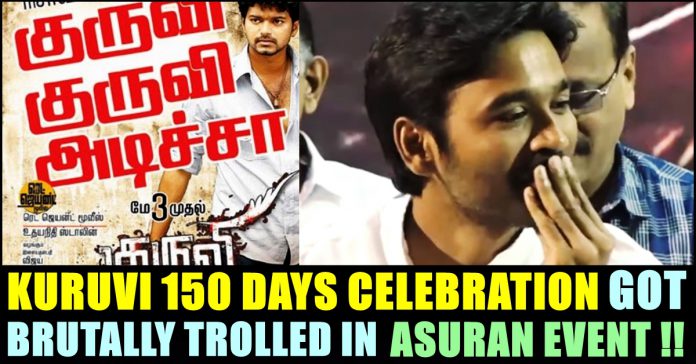 Asuran film of Dhanush and Vetri Maran has been running successfully in theatres for 100 long days as of today. The crew celebrated the success by conducting an event in which Dhanush, Vetri Maaran, G.V Prakash, Kalaipuli.S.Dhaanu took part. Asuran is considered as one of the most profitable film of 209, despite of being a critically acclaimed film.

As we all know, Asuran exceeded the expectation of the fans of Tamil cinema. Beyond Danush fans, the film is being appreciated by fans of all the actors for its intense content and the for the way the actors performed in it. Starring skilled actors such as Danush, Manju Warrier, Prakash raj and Pasupathi, the film also gave opportunities to newcomers such as Teejay, Ken Karunas, Abhirami.

Dhaanu recently announced that the film has joined the 100 crores box office. Despite of Diwali releases, Asuran managed to go past 100 days of theatrical run. Asuran, based on popular Tamil novel Vekkai, turned out to be a blockbuster with over Rs 100 crore in the bank. Directed by Vetrimaaran, the film is the blood-soaked revenge story of a father, a farmer who avenges the ruthless murder of his son. The film featured Dhanush in dual roles.

Now in the success meet, actor Pawan who is known for his appearance in Vettri Maaran’s Polladhavan and Vada Chennai has made a controversial statement during his speech. In the movie Kuruvi which was released in 2008, Pawan played one of a villain. Pawan, while appreciating the 100 days run of Asuran, said that Kuruvi’s 150 days celebration was the last time he attended a success meet for a film for its longest run. He further added that he don’t know how far the success of Kuruvi is true which made the people in the hall to laugh.

Followed by this, Dhanush while delivering his speech didn’t miss to address Pawan’s speech. “While conducting this kind of event, there will be few problems like this. We will be having the control of only what we speak. (Laughs) So please react to what is right and leave the rest” the actor said in response to Pawan’s remark.

Why @dhanushkraja is a gentleman.

Replies to the unnecessary comment about @actorvijay s 150 days celebration for #Kuruvi by another Actor.

What do you think on this speech made by Pawan ?? Comment your views below !!

“I Will Not Shut Up, Keep Trying” – Actor Siddharth !!

In a shocking series of tweets, Siddharth accused the members of BJP of making threatening calls to him and his family members for over...

Actor Vimal, reacting to the money laundering accusations emerged against him, has issued a statement to the press reporters. The actor said that the...