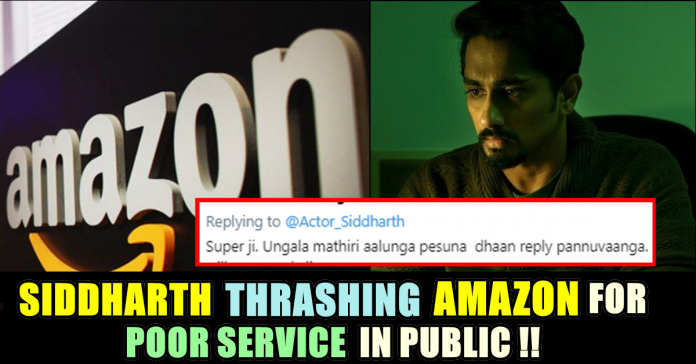 The Actor is super active in micro blogging online media twitter gave his voice for several issues faced by the Tamil society, notably he did a lot of field work during Chennai floods. He also slammed the views of Baba Ramdev and Sadhguru on Sterlite issue who said Sterlite plant is an economical suicide for country India.

Few weeks ago the actor had a major issue with “Tata Sky” the Internet broad band service where he showed his uttermost disappointment towards the organisation. Now the actor seemed to have a major issue with Amazon India,  the largest Internet retailer in the world as measured by revenue and market capitalization, and second largest after Alibaba Group in terms of total sales. The actor ordered a product which was rejected at the time of delivery. Frustrated Siddharth took twitter to slam the company for their bad way of providing product. Even the authority asked for an excuse to which the actor does not seemed to be convinced at all.

Check out the reply from an Amazon authority who offered him a compensation :

Sir, we’re very sorry this happened. We shall resend your order with compensation. Could you message order details and your phone number, so that we can begin processing it.

But the actor did not convinced at all that he replied him in utter frustration :

Sure should I also send my atm pin and my net banking password? You sound very official in your bio. Thanks.

Here’s some of the tweets from the public :

But one thing Siddharth I want to say. I am in usa. I don’t get these problems in usa amazon. So we need to think y in India? We are also paying money right. Please ask them this question if they contact u ji.

Lol what OTP? If your payment gets failed, why on earth would they still deliver the package? What a dimwit

What do you think on this blunder by Amazon ??

Previous article35 Year-Old Man Had Sex With Dog & Arrested For It !! DISGUSTING !!
Next article“Brutally Murdering Them Is Not Enough !! Why Delay ??” Asks Vijay Sethupathi On Chennai 11 Y/O Girl Rape Horror !!