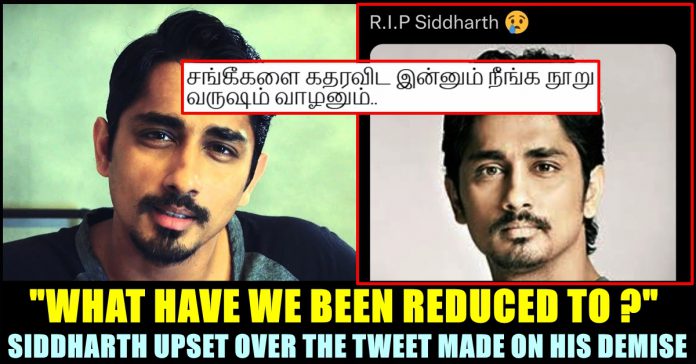 Actor Siddharth who is known for raising voice against injustice that are taking place in the society through his official twitter handle, on Thursday, came up with a tweet exposing a miscreant who said “RIP” by uploading a picture of him. The actor termed the act of the online user as “targeted Harassment” and “Hate” and questioned what the people of this society are being reduced to. The tweet garnered humongous reach with several reactions condemning the individual who uploaded the tweet.

Due to the demise of Actor Siddharth Shukla who won Bigg Boss season 13 title, hashtag “RIP Siddharth” was trending in the micro blogging social media site. According to an official statement of Mumbai’s Cooper hospital, the 40 year old suffered a massive heart attack during the wee hours of Thursday. He is survived by his mother and two sisters. “He was brought dead to the hospital some time ago”, said a senior official of Cooper Hospital, according to reports.

Apart from Bigg Boss, Siddharth is known for his roles in television serials such as “Balika Vadhu” and “Dil Se Dil Dak”. His presence in popular reality shows such as “Jhalak Dikhhla Jaa 6”, “Fear Factor : Khatron Ke Khiladi” gained in fame. he enjoyed a huge fan base in online platforms as well as among Television audience. Many fans and celebrities are flooding the social media platforms by uploading condolence post for the popular actor.

Among the thousands of online users, a man whose twitter handle name reads “Sense Ex” uploaded a picture of pan Indian actor Siddharth and said “R.I.P Siddharth” through his caption. Uploading the post in his twitter timeline, the “Rang De Basanti” actor uploaded a tweet writing “Targeted hate and harassment. What have we been reduced to?” as his caption.

Targetted hate and harassment. What have we been reduced to? pic.twitter.com/61rgN88khF

As soon as Siddharth uploaded the tweet, the twitter user seems to have protected the tweets of his account. However, his followers didn’t spare to slam his for what he did. Check out some of the reactions below :

Leave it Siddharth…we can talk to human who has six senses, but we can't do this with Junglees..!

In past, The actor is very much vocal against the BJP party and received life threats from the supporters of the party. When his personal contact numbers were circulated in social media platforms by the BJP members, police offered him personal protection but the actor refused it saying that the energy of the Police officials should be used for some other cause amidst the pandemic situation.

On the work front, Siddharth appeared in an episode of Mani Ratnam’s Netflix anthology film “Navarasa”. His part was directed by Rathindran Prasad and the actor shared screen space with Parvathi. He is all set to appear in a multi lingual film “Maha Samudram” and in Tamil films such as “Shaitan ka Bachcha”, “Takkar” and “Indian 2”.

In a recent interview we have seen Seeman announcing his next project with actor Silambarasan. Now to our shock in another recent press meet...