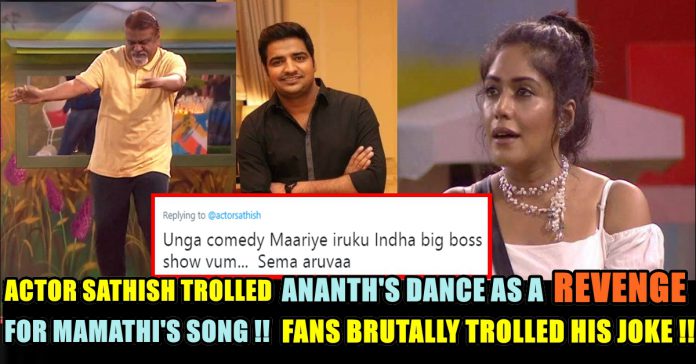 The Bigg Boss Tamil episode had the slaves in the house continuing their task. Senrayan again tries to convince Nithya about getting together with her estranged husband, Balaji, but Nithya says that she cannot continue to forgive him. Balaji loses his temper again and proves her right. He uses abusive words and asks her why she came on the show if she doesn’t depend on him. This comes after Senrayan says that she would need Balaji’s help to raise their child. To this Nithya replies, “I haven’t depended on him in the last one year. I am only okay with being friends.” After this Balaji refuses to give her any tasks. Bigg Boss ends the master vs slave task and asks the male team to nominate one bad employee and one good master. The men’s team discusses and chooses Daniel as the best master, and Nithya as the worst slave as according to them she did less work. Nithya explains that she tried to ask for work, but her master, who happened to be Balaji refused to give her any tasks. The next luxury budget task is announced by the Bigg Boss. The women in the house become the masters, and men become slaves. This task starts with problems because of Balaji and Nithya’s personal equation. Even as slave, Balaji continues to use abusive words and do the task with an attitude. Surprisingly, no one in the house stands up for Nithya. Not even the women in the house stop him from demeaning her. They all tell her to get away from him, or ignore him.

An announcement is made by Bigg Boss later that the men should entertain their masters in the house in the evening. Senrayan entertains the women with his fun dance moves while Balaji and Daniel imitate a few housemates and Sharik and Mahat dance in the entire house. Ponnambalam, Senrayan win prizes for the task and the day comes to an end. Ananth Vaithyanathan also did something in the name of  performence along with Mahat and Shaariq. He tried some moves which did not worked out well. On seeing his performance actor comedian Sathish trolled him in his twitter account. He said “Don’t leave them Ananth, Take revenge for Mamathi’s Singing” which trolled both Ananth’s dancing and Mamathi’s singing performance in the previous day. For his tweet instead laughing for the joke , his followers brutally trolled him for being a bad comedian. Check out their tweets below :

You are promoting big boss from outside.. How much for this

Video Of Man Kicking A Kid For Leaning On His Car Creates Outrage!!

On Friday morning, officials of Police department arrested a young man for brutally kicking a son of migrants from Rajasthan just for leaning on...

The trailer of actor Sivakarthikeyan's upcoming film Seema Raja was released on Saturday. It is another mass commercial entertainer from Sivakarthikeyan, in which he...